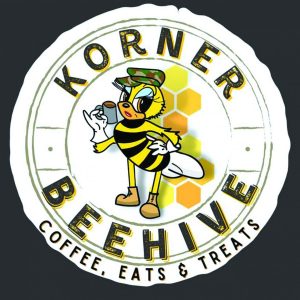 By Tony Hooker
Things have gone pretty smoothly for the ladies of the Korner Beehive in Villa Grove.

So smoothly in fact, that their planned “Grand Opening” has morphed into something way bigger.

How big? How about into a fall festival that will involve most of the town’s merchants, Villa Grove school, and so much more. I recently sat down with Mary Hite and Bethany Floyd Jenks to find out how it all came about.

How long have you been open now?

How is it going?

Has it met or exceeded your expectations?

(MH) I would definitely say it’s exceeded them.

As a next step, you’re moving toward having a grand opening which has kind of morphed into this whole other thing, right?

Nice! What all is going on?

(MH) First and foremost, it’s quickly become a reunion for former members of our Battalion (Naval Mobile Construction Battalion 25, along with veterans from other battalions). We have how many coming, Beth?

(BFJ) We have 150 confirmed, and 70 who say they’re riding the fence, but you know they’re going to show up!

(MH) We were wanting to offer things that could benefit not only our business, but also veterans and the community so that’s kind of how it turned into a Fall Festival. Bringing all those people here into the community, what better way to kind of A.) Get some other support for other businesses here in town, but also to B.) Raise some money for some good causes. I believe we’re raising money for FFA; we’re doing mums and the Blue Devil (a specialty drink at the KB) sales will go to benefit them. I believe the Chamber (of commerce) is donating a portion of their pork burger sales to the FFA, as well. We’re doing a 50/50 drawing and raffles. The 50/50 proceeds are going to a local veteran who is experiencing some major health issues and hard financial times. We’re going to be raffling off some gift baskets and things and the proceeds will go back to the chamber to help with the purchase of the new Christmas lights in town. There will be a bags tournament, with the proceeds going toward the restoration of the theater here in town.

You mentioned bags, games and pork burgers. What else is going on?

(MH)There will be two bands, one in the afternoon and one in the evening. I don’t think we have a confirmed time yet for the afternoon band, but the evening band will start at 7. We’ll have a ‘touch a tractor’ for the kids. Some of the farmers who are associated with the FFA will bring tractors for the kids to look at and climb on from 10-2. The FFA is working with Leaf It To Us on a mum sale, and those proceeds will benefit the FFA, as well. That’s going on from 10-2, also.

(BFJ) There will be train rides for the kids.

(MH) Bruce Allen from Bud’s auto parts will be doing his little caboose train rides for the kids in the afternoon. Jackie from the Camargo Township Library is going to set up a craft area for the kids from 10-2 as well. She said something about painting pumpkins and making pinecone birdhouse feeders.

(BFJ) The VFW Ladies Auxiliary will be having their craft sale going on, also.

(MH) We’ve been working with them to add some vendors and we’ve opened up the street to them so they can add vendors outside to our veteran owned vendor stands.

(BFJ) The fire department may be doing something, we’ve not heard back from them yet, and the Army National Guard might bring their rock-climbing apparatus.

(MH) Those ones haven’t been confirmed yet! <smiles>

What bands will be playing?

The afternoon band will be Orizaba, a bluegrass band, and the evening band will be Sundown, from Atlanta, IL. They do some originals, but they also do classic rock.

(MH) The EIU Pink Panther dancers will be here in the afternoon, performing in the plaza. The Villa Grove Devilettes and the Cheerleaders will also be on hand, performing. We will be offering some Halloween themed desserts for the kids.

It seems like the community has embraced you and your establishment. Is that true?

(MH) They have been amazing. We just got done talking with many of the business owners over the last few days, because with the raffles, we’re encouraging everyone to shop local. The gift baskets will be put together to encourage more spending here in town. Everyone has been very generous in their donations toward that, raffle those off and put some more money back into local businesses. People that win these might not have been in any of these businesses prior, so it could actually bring new faces into their stores.

Are you going to even mention the grand opening, or has it been swallowed up by everything else?

(MH) It’s kind of just become a community event. It is our grand opening. That’s what’s bringing a lot of our guys from our battalion down here, but if we’re going to be bringing that many guys down, why not do something that benefits the entire community.