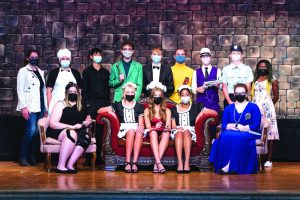 By Kendra Hennis
It’s a dark and stormy night, and you’ve been invited to a very unusual dinner party. Each of the guests has an alias, the butler offers a variety of weapons, and the host is, well… dead. So whodunnit? Join the Tuscola High School Drama Club this weekend at their performance of Clue, on Stage! to find out.

Steffens said that she chose Clue, on Stage! because it is one of the most famous shows in the country right now. She noted that they hoped to do it last year, but were unable to because of COVID.

She explained that this is a difficult show for students due to the 12 set changes as it is just like in the board game and the actors will travel to nine different rooms around the house. She noted that Tuscola has a small stage, with an even smaller backstage, that has limited room for set. However, she said that they have gotten creative for the set and that she is so thankful for the art teacher, Hailey Skinner, who is painting nine large canvases that mimic the playing cards to represent each room that will help the audience follow each scene.

She also noted that this is a fast-paced show that is more physically demanding than the students are used to doing, that they have had less rehearsal time, and that they have had to make further adjustments due to the masks required. She remarked that thankfully the school had purchased wireless face mics that help the audience hear the actors better before last year’s show which is very helpful.

Steffens reported that her favorite part of the show is the thrilling conclusion and that Haste’s character Wadsworth, runs through the entire show in fast-forward around the stage, which has taken a lot of rehearsing but he does a good job with. She also said that she knows the kids are having lots of fun and everyone is doing great preparing for their performance.

Clue, on Stage! will be held on the Tuscola High School Stage on Thursday, September 30 at 7 p.m., Friday, October 1 at 7 p.m., Saturday, October 2 at 7 p.m., and Sunday, October 3 at 2 p.m. Tickets will be available at the door, masks are required, and there are no capacity limits.