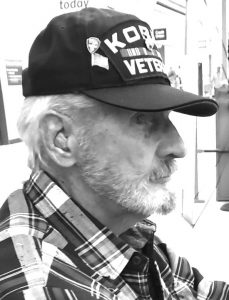 He was born on April 01, 1933 in Monson, ME, a son of Guy T. and Isabella M. Bigger Brown.  He attended Monson schools, then joined the Marine Corps in December of 1950.  He was baptized in the Parris Island swimming pool while in boot camp.  He served with C-1-7 Marines in Korea from 6/51 to 6/52, receiving a Purple Heart for wounds received in combat on Hill 673.  He served in the Marine Corps for ten years.

Dale married Lynnita Aldridge in Urbana on September 03, 2001.  He was a significant volunteer in the Douglas County Museum for ten years, doing electrical service, carpentry, fund-raising, general maintenance, and cooking.  He and his wife, the museum’s director, resigned in opposition to trustee activity.

Dale was an avid cross country and ice skater, known for making superb ice skating rinks.  He also loved animals and they loved him.  Dale was a brook trout fisherman, avid reader, baseball, football, Ted Williams and Tom Brady fan.  He was opinionated, but he was also very gentle and kind-hearted.  He was a Republican who strongly opposed the current Democrat agenda.  He was a life-long American patriot.  Dale treated Lynnita like a lady.  He brought laughter and support into her life and the couple loved each other dearly.

He is survived by children: Dale Brown, Jr (Deborah) of Minot, ME; Kathi (Jeff) Young, Auburn, ME; Terri Kilcollins, Peoria, AZ; Cameron (Leslie) Brown, Cape Elizabeth, ME; Marta Kay (Ron Beairsto), ME; Patrick Brown, AZ).  He is also survived by 16 grandchildren, 17 great-grandchildren, brother Colby (Marianne) Brown of Abbott, ME, many special nieces and nephews, and step-daughter Celena Sommer of Urbana.  He was preceded in death by his parents, sisters Barbara Lary and Joyce Smith, and brothers Gilbert, Donald, Clayton, George and Cameron Brown.

Dale was cremated and will be buried in Monson cemetery at a later date.  A memorial service will be held for him on Sunday, September 26, at 1:30 p.m., First Baptist Church, 300 E. Daggy St., Tuscola, with Pastor Mike Wilder officiating.