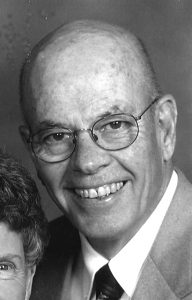 William C. “Bill” Jones died on Tuesday, September 7, 2021. Bill was born April 7, 1931 in Tuscola, IL, the son of Representative George A. Jones and Cecily (Blackford). He was a member of Forty Martyrs Catholic Church in Tuscola where he was also married to Jean Kennedy Jones on September 12, 1953.

Bill graduated from Tuscola High School in 1949. He received a bachelor’s degree from the College of Agriculture at the University of Illinois in 1953. He was a member of Sigma Chi Fraternity and he was a member of the Army ROTC. Upon graduation, Bill joined the 11th Armored Cavalry regiment where he was an executive officer and was made first lieutenant.

Bill was a farmer near the small town of Bourbon, IL and in his later years became an accomplished inventor also. He received four patents, one of which was featured on the front page of the Wall Street Journal, was used in the TV sitcom Home Improvement with Tim Allen, and was also exhibited for several years in EPCOT at the Walt Disney World Resort.

He was extremely active in community affairs. He served on the Piatt-Douglas School Board, was Chairman of the Douglas County Extension Council, served on the Douglas County Conservation Board, started the Union Drainage District, was Precinct Committeeman, and was the president of the PTA. He volunteered as a Little League coach, 4-H Leader, youth basketball coach, Illinois State Fair Horse Show committeeman, and Superintendent of the Moultrie Douglas Jr. Horse Show. Bill was a Grand Knight of the Knights of Columbus and a member of the Tuscola Rotary.

Bill and his wife Jean owned two quarter horses which won classes at the World Championship Show in Oklahoma City. Their horses were dominant throughout the United States in the quarter horse decathlon class during the 1970s.

He was an avid Illini fan, attending numerous football and basketball games through six decades. He attended almost all of his son Cliff’s games when Cliff was a kicker for the football team.

He was preceded in death by his wife, Jean (Kennedy), his two sisters, Joan Moore Cook of Charlotte, NC and Georganna Bailey of Decatur, and one son, Craig.

In lieu of flowers, the family requests that memorials in Bill’s name be made to the University of Illinois, College of Agriculture (ACES) at https://aces.illinois.edu/giving/give-now

A memorial mass will be held at the Forty Martyrs Catholic Church on a date to be announced.

Hilligoss Shrader Funeral Home is handling the arrangements. Online condolences may be shared via hilligossshraderfh.com