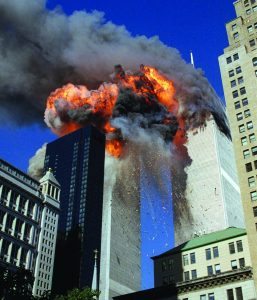 By Tony Hooker
Twenty years ago, the United States of America came under attack by ruthless terrorists, an event that not only impacted our feelings about our country and its security, but also the way we live our day to day lives.

I caught up with several prominent local citizens to share their remembrances of that terrible day, and its aftermath.

Sara Jones, Villa Grove High School principal
Do you remember exactly where you were and what you were doing when you first became aware of the horrific terrorist action on 9/11?

I do. I was driving to Newman grade school getting ready to teach third grade. While I was in class, we had a TV going in the library and we discovered that the second plane had hit.

I don’t think we knew what was going on, but we knew it wasn’t good. I was 23 years old and had a bunch of eight-year-olds in the classroom and we didn’t know what to think.

How did your school respond?

We tried to explain what was going on the best we could, but we didn’t understand what was going on at that point because the president had not addressed the nation. We really didn’t know, and we just tried to reassure them that “you’re in Newman, nobody is after us, you’re going to be safe”, that sort of thing. We had a couple of parents that were in the military, so we made sure to contact them and they got to talk to them, that sort of thing.

Definitely with my generation, and with anyone older than us. We had a moment of silence and read a poem today in school. We told them that “we know you don’t remember this, you weren’t even born yet, but you need to appreciate and understand the events of that day. “

Dan Sappenfield, Boyer and Sappenfield Investment Advisors
Do you remember where you were and what you were doing when you first became aware of the horrific terrorist acts on 9/11?

I guess I was kind of numb, wondering if it was an accident, and then the second plane hit and then it changed into something very serious.

How did your company react? Did it impact the way you did business?

Absolutely. Everyone was just so much more unified at that time, so our company and our clients were more united than we’ve ever been before.

Absolutely! It has to resonate with all of us.

In many ways. We were all reminded of our freedoms that we had taken for granted. Even things like getting on an airplane, or traveling have changed forever.

Mary Hite, co-owner, Korner Beehive
Do you remember exactly where you were and what you were doing when you first became aware of the horrific terrorist action on 9/11?

I was home with my new-born son.

What was your response to the event?

I ended up enlisting in the military.

Yes, definitely within certain communities. The active military, the veterans, the first responders, those types of communities but with the state of the world today, I think a lot of people have forgotten. Our world has never been more cohesive and united as we were on September 12.

Obviously, I know the answer to this question, but did that day change you in any way?

Bethany Floyd-Jenks, co-owner, Korner Beehive
Do remember exactly where you were and what you were doing when you became aware of the events of 9/11?

I was sitting at my grandparent’s kitchen table because I was pregnant with Libby.

Actually, it was complete shock. I just couldn’t believe it.

What was your response as a family?

We were all in shock, and then all I could think was “Oh, (no) I’m getting to have this baby and then I’m going to have to pack up my stuff and leave.

You were in the military at that time?

Yes. I knew I would be getting deployed, and less than a year later I was.

Where did you deploy?

We packed our bags and headed for Rota (Spain) because we were supposed to build a base in Turkey and then move into Iraq.

Somewhat. I’m kind of like Mary, I think that military, first responders, and those types remember. I think there are a lot of people who’ve forgotten about it.

I spent the next ten years being deployed every two years.

Thank you for your service.

Darren Gilles, Gilles True Value Hardware
Do you remember exactly where you were and what you were doing when you became aware of the horrific terrorist actions on 9/11?

I had just returned from a sales meeting, and I was watching CBS this morning.

What was your initial reaction?

Until we knew it was a terrorist attack, I thought it was just a crazy accident, with that plane flying in there. Once I learned all the details, I realized how terrible it was.

How did your organization react?

The company I worked for actually had a floor in one of the towers, and some of the people in those offices were killed. We tried to go “business as usual”, but we remembered those people.

What company was that?

Thompson Learning, at the time.

Did it change you in any way?

It did. It made me more patriotic.

Mike Zylstra, Villa Grove Christian Church
Do you remember exactly where you were and what you were doing when you first became aware of the horrific terrorist action on 9/11?

I was living and preaching in Litchfield, MN. My calendar for that day says that I had a 10 a.m. meeting and then a luncheon meeting with the director of our local Community Education program. I can’t remember if I attended those meetings or if they were cancelled.

I don’t turn on the TV in the mornings, and there was no TV in my office, so I didn’t know about the attacks until later in the day. I don’t even remember where I was when I first heard about or saw the replays of the attacks. I wasn’t scared or anxious. Mostly curious and in disbelief. I felt sadness and empathy for all those who died.

Our church congregation joined with and supported other churches in town who were arranging services of memorials. We put the event on our prayer chain and prayed a lot.

Yes, it still resonates. But not the same way with every generation or with every person. After the attacks people went back to church for a few weeks. That stopped after a couple months. While the 9/11 anniversary causes an upsurge in patriotism, I don’t think it resonates with people spiritually.

While it was devastating, and I pray it never happens again, my trust was then, and still is, in God for protection and justice. I don’t always understand God’s will. Or why bad things happen to good people. Or, why God allows evil in the world. I believe that God is sovereign over everything and always does what is good. If anything, 9/11 just reminded me that our physical battles are always rooted in a spiritual battle.

Duane Piercy, Victory Church
Where were you and what were you doing when you first heard?

I was building a house in Cherry Hills in Champaign when Cheryl called me to tell me what was happening. I went out in my truck to listen to the events on the radio.

My initial reaction was horror and disbelief. It felt as if an evil we have never known before, had descended on our world.

We called for a special evening of prayer where many people from different churches, and faith walks came together to lift up our nation, and all the people affected by the tragedy.  It was such a time of uncertainty that we realized we needed to come together as a community to be there for one another and pray.

Yes absolutely. Especially with the U.S. military’s recent withdrawal from Afghanistan, I believe now more than ever,  9/11’s influence has yet to disappear.  I think we all have a sense that another terror attack is quite possible.

I think it made me more aware. It made me more aware of the evil in our world and against our country. I know that my youngest son, and grandchildren will never know the innocence about threat and danger within America. At the same time, I have a deeper appreciation for the real heroes who serve and those who have died, to protect our American freedoms. I also saw the best of America as the many first responders, and volunteers courageously showed us what bravery looked like.

Jackie Wells, Camargo District Township Library
Do you remember exactly where you were and what you were doing when you first became aware of the horrific terrorist action on 9/11?

I had dropped my kids at school (I worked nights at the U of I back then) and was headed home to go to bed. When I got home the TV was on and they were showing the first tower had been hit by a plane, and I was so worried because my brother and his partner were both flight attendants with Northwest

I called my mom, and we were both trying to see if they were flying that day.  Then minutes later the second tower was struck, and I did not sleep that day, I stayed glued to the TV watching the horrors of that day unfold on national TV.  Just typing this I have tears welling up just remembering; needless to say, I went to my shift that night mental and physically exhausted.

We were all in shock.

I wish our country still had the same solidarity today they did in the months that followed that horrible day. I hope it doesn’t take something like this to happen again for us to get back to being one nation under God.

My husband and I visited the flight 93 memorial in Pennsylvania a couple of years ago and listening to the last recorded messages of some of those brave souls was heartbreaking. I am so thankful that my brother and brother-in-law were not flying that day but so sad for those families that could not say the same. Never forget!