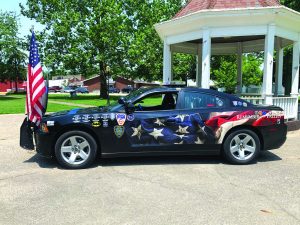 By Kendra Hennis
Former Ohio Police Chief Terry Hatfield Sr. made his stop in Newman, Illinois back in July, sporting his Remember Fallen Heroes memorial car on his venture across America. Hatfield’s car, a 2011 Dodge Charger is decked out in a complete police package including a functional light bar, reinforced front bumper, and an Americana color scheme. It also features decals commemorating all of the armed forces, as well as the police, fire departments, EMS, ambulance services and more.

Hatfield remarked that he created the memorial car as he was “looking for a purpose” after he became semi-retired from the police department. Hatfield served over thirty years, starting out as a young enlistee in the U.S. military. He was a military police officer, followed by a Toledo Police Officer and eventually Chief of Police. From his work experiences in the army and police department, he was diagnosed with PTSD before retiring. However, Hatfield found he had a purpose in life that led him to developing a program to not let the nation forget our fallen heroes.

Hatfield takes the car everywhere, noting that he “wants society to see what they’ve done’ and to learn the value of these public servants of society as well as remember our fallen heroes.” Hatfield said that he believes the biggest disconnect in our current society is the need for education and communication between police officers and the community. He noted that if the police had the public’s trust then the department would be okay, and told stories of his time on the force.

A notable upcoming stop on Hatfield’s tour is at the 20th Anniversary of 9/11 parade in New York City. Hatfield said that he was invited out by “Fueled By The Fallen” to be a part of their 9/11 anniversary memorial tour. Kevyn Major Howard, “Rafterman” from Stanley Kubrick’s blockbuster film Full Metal Jacket, challenged himself in 2007 to name just one hero that had died for his freedom. “I was watching the nightly news as they announced that 12 died this day and 7 that day”, Kevyn said. “I woke up one morning and challenged myself to name just one person who has died for my freedom”, he continued. “I couldn’t.”

So Kevyn decided to do something about it. He started the Fueled By The Fallen, a 501(c)3 non-profit. Kevyn enlisted the expertise of Chuck Spiker, a lifelong drag racer and former National Go Kart Champion, to create a memorial that would get the attention of all Americans. “The reason we chose race cars is because you can get the attention of a two year old and a ninety-two year old with one”, Kevyn said. Chuck took a 1963 Nova and created a 10 second quarter mile door slammer drag car representing fallen Marines from Iraq and Afghanistan. “Maybe I can get people who look upon the race car to remember just one name. If I can do that, I have accomplished my mission”, Kevyn continued.

Fueled By The Fallen is currently hosting First Responder Ceremonies at Police and Fire Departments throughout the tour. In partnership with the Spirit of Liberty Foundation, the Unity Torch will be presented and passed to participants attending the ceremonies. The 9/11 Angels will be stopping at the Pentagon, NYC, Cantor Fitzgerald, Wall Street, 9/11 Museum, and Shanksville to honor and ‘Never Forget’ the 2,977 who perished that painful day in history.

A Documentary to be narrated by Kelsey Grammer and directed by Steven C. Barber is being filmed throughout the Tour. More information about Fueled by the Fallen can be found on their Facebook page.