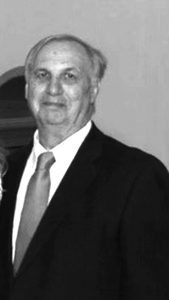 He served in the Air Force in Intelligence, and was stationed in Germany. On his return from Germany he worked at GATX terminal at night while attending classes during the day at University of Houston.

After graduation Jim worked at Houston Fuel Oil Terminal as Director of Regulatory Affairs.  During this time he was on the Board of Independent Liquid Terminals Association. For a period of time he served as Chairman of the Board. Jim met and married Sherry. They traveled while he was on the Board and made many friends.

For a period he was on the Board of his neighborhood Association.

On retirement he raised several German Shepherd dogs and cats.  He walked 7-10 miles a day meeting numerous neighbors with their dogs.  He was conservative, loved people and respected people who were hard workers.

He is survived by his wife Sherry, sister Marsha, her husband Jim Sweetenham of Port Neches, his brother Tim Bailey, San Francisco, CA. Nieces Jennifer (Jeremy) Kupper, their children Kade and Lyla, Rebekah Ft. Worth, Tx, Katie (Brent) Wyble and their son Kase, and nephew Chris (Lexi) Sweetenham, Sulfur, LA and John Speights and his wife Leslie, Houston, TX Jim was a quiet, private person who loved people and animals. He always did his best no matter what he was doing.

Jim touched a lot of lives.  He was caring, had a good personality and helped people.

He will be missed, and definitely remembered!!