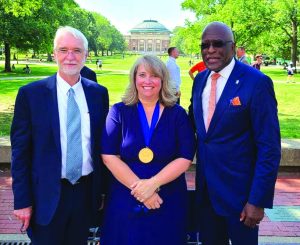 By Tony Hooker
The phrase “She wrote the book on it” is sometimes overused.

However, in Laura Wilhelm-Barr’s case, it’s true. She was the creative force behind the University of Illinois’ COVID-19 testing sites, literally writing procedures manuals as she went, and spearheading the logistics behind the daily testing numbers which at times reached 17,000 tests per day.

For her efforts, she was one of 28 people who were recognized with the President’s Medallion. She recently and rather reluctantly, (she’s all about recognizing her team and isn’t too keen on individual accolades) sat down with me to discuss her herculean efforts at the start of the pandemic.

The honor that you received is a big deal, right? Let’s put it like that.

It was very nice. Very unexpected. It was nice to be recognized, and I took it as though the entire office had been recognized.

What exactly is the award called, for those who might not be aware?

It was the Presidential Medallion. (UIUC) President Killeen presented it to 28 of us. He’s not done that before in his tenure here, so we were very honored to receive it.

What was the basis for it?

On our campus, the folks who received the honor were part of the shield testing and tracing program. We helped set up the testing site ecosystem and develop the app that is still being used today.

Did you graduate from Villa Grove?

What is your job title?

In 1989, walking down the halls of VGHS, did you think to yourself “Some day I’m going to be the senior director of special events?”

No. Never! Not at all. I went to the U of I and got a degree in English, went to work for a publishing company and I thought I would be a book editor. I found that pretty boring, truthfully. I’m much more social than sitting in the back with a little red pencil, editing manuscripts. The first year I was there, they asked me to be involved in setting up a conference in Virginia Beach. I thought ‘this is awesome! They’re paying me to travel and to set up this conference!” It was all about the details and communicating what was needed for the conference. I got into special events at that time.

Your role at Human Kinetics then evolved to the point where you were doing events planning?

Yes, I was there for three years and then a position opened in the chancellor’s office, and that was 1996. My mom had worked there (UIUC) for her entire career, and I thought it would be a nice place to work, and I’ve been there ever since.

What are the keys to being successful in your line of work?

It’s just a matter of being detail oriented, communicating about what needs to happen, sticking to a timeline and being focused on the end result. The shield COVID testing sites were not anything I would have equated with the job title I currently have, but when we were no longer having in person events on campus, they came to me as asked if I could set up the covid testing sites, find locations on campus. I’ve been here a long time, so I know a lot of buildings and I know how to set up tents and how to get facilities and services involved with everything from the electricity needs and technology needs and the equipment and materials that we would need to set it up. That’s how I came to be doing covid testing sites, when I would normally be focused on special events like commencement or new student convocation, or things like that.

Illinois was recognized all over the world for their innovative methods of testing, and you were a part of that?

There were so many of us who were involved in the beginning. We were all working seven days a week. It was a huge endeavor at the time, and still is, truthfully. Four testing sites are still up and operating seven days a week. In the beginning, we opened 18 testing sites on campus and so we had a very quick ramping up of that. I was asked to help with setting up the sites in May, and by July we were opening testing sites. From a science side, they had been working on the saliva test for months.

That science is no longer exclusive to Illinois, right?

The University of Illinois has expanded that to high schools all over the state, and Parkland College is one of them. We’ve had calls from all over the country asking us how we did it, and all the credit goes to the science side. Brilliant minds like Marty Burke, Paul Hergenrother and Timothy Fan who were a part of that.

Were you nervous when you were called upon?

This is a medical test, so we wanted to be sure that we were following all the protocols and that the staff was safe and that we were administering the tests in a way that would get good results for people to know if they had COVID so they could quarantine and isolate and protect the rest ack of the community so that was the part that was most stressful.

Circling back a bit to your award, those are the kind of the circles you run with, right?

What’s your involvement with commencement?

The whole thing? From soup to nuts?

Yes. My staff, there are five of us in the special events office, plan UIUC commencement, convocation, groundbreaking dedications, advancement events, premium seating for the president at football and basketball games, things like that.

Did you even imagine this?

No! Not at all! I really thought I’d be a librarian or an attorney. Something with the written word is really what I thought, and this is really more of a social type of career. It’s a lot of behind the scenes, setting up big events like commencement where you have 20000 people, but it’s communicating with people and helping them celebrate their great achievement. It’s a fun job, but a lot of stress when you think about the scale of something like that.

What sort of advice would you give to someone who says “that really sounds like fascinating work. Maybe I want to try it?”

I would say to get experience, because that’s what I did, and also to say yes when someone asks you to work on a project, because that all leads to more experience that you can use later, and you can turn to in the next role or the next project. People tell me that they want to be a wedding planner, which I would never want to do, to be honest, I didn’t even want to plan my own! <smiles> People need whatever experience they can get. There are numerous event planners on campuses.

What’s the future hold? How many more years are you going to do this?

I’ve been there for 25 years. Liam’s still a senior in high school so I still have quite a few years I would imagine. 25 years has flown by though.