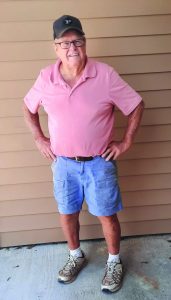 By Tony Hooker
It’s not every day that you meet Merle Haggard’s cousin.

It’s also not every day that you talk to someone who has held numerous national records and been crowned national champion several times. It’s also not every day that you meet someone who once was offered a scholarship to Loyola University. However, Villa Grove’s Don “Fuzzy” Prather is just that someone. I recently sat down with the local octogenarian to discuss his career in athletics, his work, and a great deal more.

To say you’ve led an interesting life might be an understatement, eh?

You were quite an athlete, growing up and attending Urbana High School. How did your interest in sports come about?

I would say it’s through my brothers. I’m the baby of the family, and all my older brothers skated, and my second brother was pretty good at football. In fact, he got a scholarship to Beloit.

Skating is kind of an unusual sport to participate in in Central Illinois, isn’t it? How did you come to find it?

My second brother skated. I think that about the only thing open during the war was the ice rink, so he was the first one to speed skate. He did very well, too. He won some state titles.

And you won some national speed skating titles?

What distance is the track?

You skated different races and then added the points up. There was the 220, the 440, the half mile, the mile.

Did you have a favorite event?

The short ones! <laughs>

Yes, the long track is 400 meters, and the short track is just about 100 meters.

And you raced on the short track?

Yes. Growing up, we had the only rink around, so we would go up to Chicago and the suburbs for races at Comeau Park for the silver skates. (An event held annually in Chicago since 1917) Out in Glen Ellyn, in Elgin or Northbrook, whenever there was ice.

It sounds like it was quite popular back then?

Yes, I suppose it was.

Has it lost its popularity today?

I think so. The Rink’s closed now, I guess. I haven’t been over there. For a lot of kids, that was something to do in the wintertime, and there wasn’t a whole lot else.

It seems like skating could be done without a lot of expense?

A set of speed skates cost around $100, and that was in the sixties. The indoor speed skate’s blade is on the left side and not down the middle, so you can lean and not have a boot.

What other sports did you participate in?

Trap shooting. Track. Cross Country. I didn’t like cross country <laughs> but it kept me out of P.E.

Did you ever win any events?

I broke 100 straight one time and won one.

When did you move into coaching?

Right after I got out of high school, I was helping out, coaching. My wife is a national speed skating champion too, so it was just natural for us to help out around here.

How long did you coach?

Probably about ten years, and then I got involved in national and international events. I made up the heats for two short track world meets, before computers! I was a steward.

Did you coach Bonnie Blair?

No, I did coach Eric Henriksen. In fact, The Henriksen Family, along with the Marklands and my family, organized the first world short track meet at the UI Ice Arena in 1957. There were two clubs that skated and practiced at the same time. Champaign-Urbana and UTC. We all intermingled and coached one another. We were all one big family, and the Blairs rode with us in our motorhome to all these national events.

Did you know that she was going to be good at skating when she was a little girl?

No. Not until the National Sports Festival. Every year that there wasn’t an Olympics there was a national sports festival where you got to compete against top competition. Bonnie would be sitting on the bed with weight on her legs. She was no ordinary speed skater and worked incredibly hard at it.

How long have you been married?

Were any of your children skaters?

Yes, they all skated. Our daughter was the best. She won national and North American titles as well.

How did you come to live in Villa Grove?

I was driving down here to play golf every day after I retired, and I decided that driving back and forth between here and Urbana probably wasn’t the best idea.

You retired as a civil engineer? Did you have formal training?

I spent three months at the UI, back when the interstate was getting started. We had surveying, materials and courses like that. I started out as a technician and ended up as high as I could go without a license. I had a really good work life. I never had a boss I didn’t like. It was actually fun to go to work.

You were part of the interstate and then worked at Clinton Power plant?

No, I spent nine years working on the highway and then I moved into water resources, doing flood control all over the whole state. I’ve worked basically from Cairo to downtown Chicago.

I guess winning the nationals and North Americans. We had fierce competition amongst us.

Who was your main rival?

All of them! <laughs> We had a group of guys and it seemed like we just took turns winning. Davey Arends, from Cedar Rapids, was probably my best friend and biggest rival.

How would someone from this area who is interested in speed skating get started, these days?

It would be tough because there aren’t many rinks around now.

The UI Ice rink is closed?

I haven’t been by it, but it was. (According to UI campus recreation, the Ice Arena was set to re-open on August 23.)

Terrible. <laughs> I’ll be 82 on Wednesday, and the older that I get, I am finding that I don’t hit it like I used to, but I still enjoy it. It’s a fun game that anyone at any age can play. As long as you don’t get mad. You have to remember that you’re only as good as you practice. You would be surprised, but the more you practice, the luckier you get! <smiles>