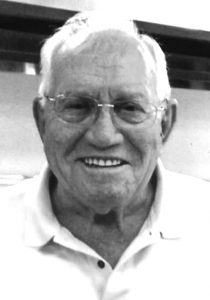 Memorials may be made to Tuscola Health Care Center. Online condolences may be shared at www.johnsonandsonsfh.com.

Dean was born on August 11, 1923, in South Muddy Township, Jasper County, IL, the son of Lawrence and Oval (Gossman) Chesnut.

Dean served his country in the United States Army from 1944-1946 as a Sergeant with the 95th LT Tank Company. Dean enjoyed farming for most of his life in Jasper and Clay counties. After retiring, he later worked at Rural King in Effingham. He loved watching his grandchildren and great-grandchildren play sports. He had a good since of humor and a great laugh. He also was known to tinker and enjoyed fixing things.

He was preceded in death by his parents; son, Dennis Chesnut in infancy; stepmother, Laverne (Tate) Chesnut; and sister, Mae Toppe.