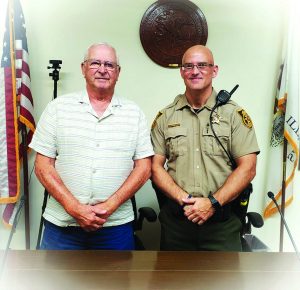 By Kendra Hennis
The meeting of the Douglas County Board was called to order on Wednesday, August 18 at 9 a.m. with all members present.

Following the PLM committee of the whole meeting on Tuesday, the board moved to nominate Nathan Chaplin to fill the remainder of former Douglas County Sheriff Joshua Blackwell’s term. On Tuesday, candidates Chaplin and Republican Central Committee nominee Wes Fleener were invited to be questioned by the board. Fleener declined the board’s invitation to be interviewed on Tuesday.

The board then heard from Douglas County Health Department administrator Amanda Minor. Minor reported that cases of COVID are currently rising in Douglas County, and that they were working to release as much information to the public as possible on their Facebook page and website. She said that the health department is still completing COVID vaccinations and testing. The health department is also continuing to hold vaccine clinics, with two last week and one coming up at Broomcorn in Sept. Minor was asked about a booster shot and noted that it was likely coming but at this time that had not received guidance. Minor also noted that they are seeing fully vaccinated people who test positive for COVID. However, they have found their symptoms to be less intense than those who are unvaccinated. She additionally noted that the symptoms the health department is seeing this year is different than last year, and very similar to the flu; with some being fever, cough, and runny nose. It was asked what the outcome would be if students went to school without masks. Minor explained that if they recieve a complaint about the school, it is sent to the Illinois State Board of Education. She also highly recommended students wear masks, saying that she did not think the kids really minded. Minor was also asked about online vaccine card registration and said that this is an online portal that can be set up with the Illinois Department of Public Health. Minor said that it should have all records uploaded in it, but the health department can assist if you cannot find it online.

Tuscola Economic Chamber & Development Chairman Brian Moody then followed, informing the board that the Back to Buisness funds had been released. He encouraged businesses who were unable to access previous funds to check it out, and noted that information on the program would be on the City of Tuscola Facebook page and website. He noted that those needing assistance could contact him. Moody was additionally asked about any update on the LyondellBasell closing and reported that it was nothing new but that they were working with them to do anything they can to help employees. He noted that the plant currently had 94 employees and that they were going to create a task force to help find opportunities and move forward.

The board also:
* Approved the payment of the county’s financial obligations.

* Approved the reports of fees of county offices.

* Approved Ordinance 21-O-4 establishing a standing committee to advise the county board about technology resource and management. This committee was deemed necessary due to the increasing use of electronic data and improvements in equipment on an ongoing basis.

* Approved Ordinance 21-O-5 amending the duties of the building and grounds standing committee. It was noted that this needed to be updated to include the grounds of other county buildings and offices.

* Approved Ordinance 21-O-6 establishing the compensation of the Douglas County Sheriff by the county board.

* Approved Ordinance 21-O-7 establishing the compensation of the Douglas County Coroner by the county board.

* Approved Ordinance 21-O-8 establishing the compensation of the Douglas County Circuit Clerk by the county board.

* Approved Ordinance 21-O-9 establishing the compensation of the Douglas County Clerk by the county board.

* Approved Ordinance 21-O-10 establishing the compensation of the Douglas County Treasurer by the county board.

* Accepted a bid proposal from Mid West Restoration Inc. for Courthouse repairs in the amount of $85,510.

* Appointed Pat Titus to the Douglas County Ag Center Board of Directors for a three-year term.