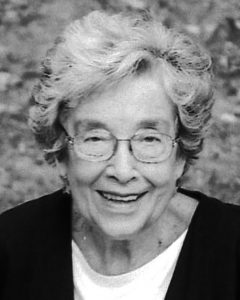 BJ was born on December 24, 1929 in Tuscola, IL. She was a daughter of Carl and Mary (Brooks) Hansen. She married Gerald (Jerry) Hale on the dance floor and later married him on May 14, 1960 at the Zion United Church of Christ in Arthur, IL.

She is preceded in death by her parents.

BJ graduated from Arthur High School in 1947. She had worked as a secretary at Progress Industries and USI before starting a family.

BJ was a member of the Zion Church of Christ in Arthur, IL, the American Legion Auxiliary, Bourbon Home Extension, the Turtle Club. She was a longtime Girl Scout Leader and co-founder of the Tin Can Grannies.

BJ loved going to dances with Jerry back in the day and doing crafts for the church and Home Extension. She liked meeting the “DQ group” every Wednesday night for a hamburger.

Memorials may be made to the Arthur Girl Scout Troop 3130, the Special Olympics or the Christmas Fund at the Arthur Fire Department.