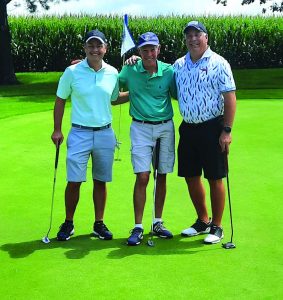 By Tony Hooker
For the members of Tri-City Country Club, certain things are familiar and never changing. The daunting trees between tee and green on number two. The water that plays a role on every hole on the course except number one. The delicious smells that drift out of the kitchen area. And Jeff Holmes teeing it up for the annual club championship.

Holmes, a five-time club championship winner, first put stick to ball in the 1962 tournament, and hasn’t missed a year since. You remember 1962, right? JFK was president, and he and the Russians had a stare down over the Cuban Missile crisis. America became more active militarily in some remote SE Asian country that no one had ever heard of. A place called Viet Nam. And you could buy a house for around $12,550 and a dozen eggs and a pound of bacon could be yours for about a buck. I recently sat down with Jeff to talk about what it was like growing up on the course, how the game has changed, and so much more.

I don’t know. Probably caddying for Jitzy Tanous in the finals of the club tournament when I was just a young kid. He went 36 holes against Bob Harrison and won it on the last hole of match play.

I’m surprised that you didn’t mention one of your club championships as a favorite memory.

I’ve been fortunate enough to win some and they were all fun, but there’s a lot of other things out here that I’ve been able to enjoy. I’ve enjoyed everything.

When did you win?

And did you win in between?

Of course, I can think of one moment that has to rank up there as your least favorite. You were struck by lightning on the course, right?

Yes, I was playing with my dad, mom and sister, and a storm was brewing. Mom and my sister went back to the club house and dad and I took shelter in the structure that used to stand near the sixth tee, and lightning struck near us and ran across the ground and got us. Jitzy Tanous, who might have been in med school at the time, and Doc Leon came out to treat us. They had to use CPR because my heart had stopped beating.

When I could hit the ball a little bit further, I’d say probably number 9. It’s a challenging hole and to play it well is fun. The new number 8, when I can get it out to the corner is a good hole.

Did your father play?

He did. He loved golf. He wasn’t all that good at it, I think his best score out here was a 37 for 9 holes, but he thoroughly loved the game. I think it gave him a way to get away from the realities of the world for a short while.

And he passed that on to you?

Yes, he gave us every opportunity. I remember my brother Jack and I started when he was 13 and I was 11. That’s when they turned us loose. We had a little junior set that dad bought us, with a 2-wood, a 2-iron, a 5-iron, and a putter. That’s what we started with. I remember that Jack wanted to get a better set of clubs, and dad told him that when he could break 40 with that little set, he’d buy him a new one. It didn’t take long for him to break 40! <smiles>

Did you play other courses? Did you have aspirations of playing in bigger tournaments?

I did. I was fortunate enough to play in the state amateur six times. The first couple of times, it wasn’t hard to play in it because there wasn’t any qualifying. You just signed up and you were in. It kept getting progressively more difficult each time to get in, so I was pretty fortunate to be able to play it that many times.

What’s changed the most about Tri-City in the years that you’ve been playing it?

When I first started, before I really started playing a lot, we had sand greens, so that was a big change, going from sand greens to the grass greens we have now. Plus, people don’t realize how many trees were in the way back then, even in the middle of the fairway. Those have been lost through the years, so it was way more difficult to score back then.

How about the game itself? What’s changed the most in your years of playing?

Well, obviously the equipment. The golf balls have gotten much better. Sometimes I wonder what would happen if I could go back 50 years and play with the equipment I have now or put some of the equipment we used then in the hands of these guys now and see how they would fare.

The course itself has changed radically over the years, as well?

The layout changed when the Henson family gifted the ground to us, and we were able to expand the layout and rearrange a few holes. We were able to get a par 5 in there that we hadn’t previously had before.

How about the clubhouse? It feels like it’s a family atmosphere. Has it always been that way?

A lot of second and third generation guys have come in?

Absolutely. I think our board is excellent. We got some young blood on there that has ideas that they’re following through on.

How about your playing partner? Does he have a chance? <smiles>

You mean Michael? <laughs> He holds me together and brings us through every week. He gets his share of birdies, which really helps.

Did you encourage him to play, like your father encouraged you?

Yeah, he’d hit shots out in the front yard. He had one club, and he’d just keep hitting and hitting from one spot. When I’d bring him out to the course, he had one club, a little junior 5 wood. I’d give him a ball and that one club, and he’d use it for everything. When we’d come home, his mom would always ask him how he did, and his answer was always “pretty good,” so he was happy with the game. I didn’t ever force it on him.

I think that’s the key to grow the game and grow the Club. Is what Jason Watson’s doing important? Keeping it fun?

I think that’s the most important thing. Keeping it fun. You don’t want to get too technical with them early on. You need to teach them how to grip the club, how to chip and hit and that sort of thing, but I’m sure Jason has done a great job of being patient with them and teaching them how to enjoy the game.

How many more club championships do you have in you?

None. <laughs> As far as winning them, I’ve got none left in me, but as far as playing, I’m going to keep coming out.

Has the equipment gotten about as good as it can get?

You know, every time you think it’s about as good as it can get, it gets better. It’s kind of the same way it was in the newspaper business. When I first got there, it was lead type, so when we got photo typesetting, I thought that was it, and then the next thing you know, we had computers. It’s the same way with golf. I just don’t know if there’s a limit. One thing I’ve seen about equipment over the years is people would slice or hook it all over the place and once this new equipment came in, everyone got straighter. It helps reduce a lot of mistakes.

Michael’s got four championships and you’ve got five. Do you think he’ll surpass you?

I think so. I hope so. <smiles> My brother Jack’s got a couple of championships, and my sister Jane won on the girl’s side, so we’ve been pretty fortunate in that. My dad couldn’t compete with that, he won the handicap once. He was a good competitor.

This is my first year of playing regularly, and I really am starting to love the game. I can only imagine how deeply ingrained it is in someone like you, who’s been playing your whole life.

It’s neat. Families can go out together. I see that all the time. We’ll be sitting in the clubhouse eating dinner on a Friday night and the course is almost filled with parents with their kids. It’s just really a great atmosphere. Golf is something that you can play with your family for the rest of your life.