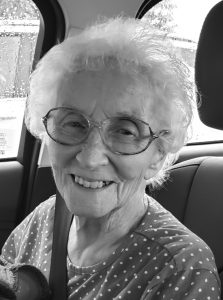 Mary was born in Danville to Dale and Joy (Willison) Knight on November 21, 1929. She graduated from Indianola High School in 1947 and the University of Illinois in 1951. She married her high school sweetheart, Jack Williams, in Las Vegas, Nevada on June 14, 1952, and he preceded her in death on November 13, 2005.

Mary belonged to the Tuscola Women’s Club, where she became a Jewel member for her 50 years of membership in 2012. Mary was also a member of the Douglas County Retired Teachers, Douglas County Museum, and the Mary Circle of the Tuscola United Methodist Church.

Mary was a proud U of I graduate. She was an avid sports fan of the U of I, the Chicago Cubs, and the Chicago Bears. She enjoyed being with her grandchildren and attending as many of their extracurricular activities as possible.

Funeral arrangements were held on Monday, August 9 with visitation starting at 1:00 p.m. followed by service at 2:00 p.m. at the Hilligoss Shrader Funeral Home, 705 S. Main Street, Tuscola, IL. Graveside service and burial were at the Woodlawn Cemetery in Indianola, IL at 4:00 p.m.