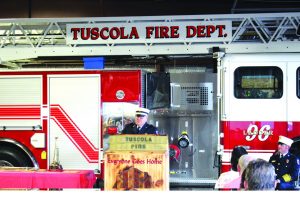 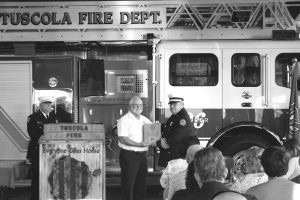 Photo: Kendra Hennis
Mayor Dan Kleiss presents Assistant Fire Chief Chip Haake with a Departmental Plaque on behalf of the City of Tuscola, with thanks for his 29 years of service with the Tuscola Fire Department.

In addition, Haake has been a member of the City of Champaign Fire Department since 2003, where he currently serves as a Lieutenant. Haake said that training was a very important part of the job for him, and serving with both forces as well as training with the Illinois Fire Service Institute allowed him to bring all of the things he had learned and help each department. Haake exclaimed that a very important part of the job was to “never stop learning.”

At the ceremony, Haake was read a few remarks from Tuscola Fire Chief Brian Moody. Moody exclaimed, “It is fitting we honor this Chief Officer who has given over 29 years of service to Tuscola and who has been a positive influence on our brotherhood.” He continued, “Working side by side with us; learning and teaching along with us – this man has imparted something positive to us all. Our community is blessed. This is in part because you and those before you have given of themselves to the greater good. You have answered all types of calls – left your life and family on hold – at night and on weekends in weather good and bad. You have been a key element in the saving of lives, in protecting property and in teaching our community how to prevent fires… This man has shown an enthusiasm for the fire service, for training others, and for keeping us all safe. I personally cannot thank you enough for all of the years you have committed to our department and this community.”

Haake was presented with multiple awards and memorabilia, including a departmental plaque, bugle from officers, helmet, and flag.  Another was an ax from the firefighters with a plaque that reads, “Passion is a powerful tool. Your dedication to be the best leader you could be had defined who you were as an officer and as a Chief. Not just any Chief, a “Fireman’s Chief”. A Chief who works for his people, and continued to display a high level of integrity by adhering to your strong moral principles and your consistency in character. As a Fire Fighter, it is your ultimate goal to work for an officer, and Chief, who had a strong foundation, who is confident and recognizes the values in others; and who focuses on the strengths in themselves and the people that work for them. You have always proved success in these areas because you understand that being a great leader is only as valuable as it is practical. No one understood better than you, that it takes courage to fulfill vision, and your vision came from passion, not position. Be proud of the hard work you have done, the person you are, and the difference you have made here and for the City of Tuscola. Thank you for everything, Chief.”

Haake remarked that, “Being on the Fire Department in Tuscola is a job of passion, either your heart is in it, or it’s not. I was passionate about that job for 29 years and I enjoyed helping the residents of Tuscola in their times of need and worst times.”