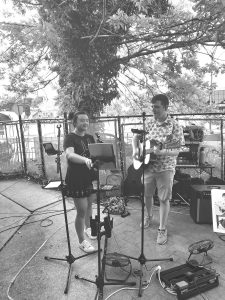 After all, his father is an accomplished musician, and his Grandad’s a member of the Minnesota Music Hall of Fame.

For his partner Therese however, the road has been a bit different. While picking up a degree in Chemical Engineering from the University of Illinois, she played piccolo in the Marching Illini. Then she answered an audition call as a bass player, and the rest is history. I recently sat down with Jon to discuss his musical interests, and what the audience at Ag Days can expect from his band, Allnighter on Friday, August 6.

How long have Allnighter been playing together?

We started in the fall of 2019. Therese and I got scheduled to play a country show, and at the time we didn’t play a lot of country music, but they wanted a band, and we didn’t have a band, either. <smiles> We put together a band and we called it “Biscuits”. We played that show, and the set list was formed by the students who hired us, and that band formed into Allnighter after the second show, and we’ve been together ever since. We still play about 90 percent of the songs from that first show.

How did you come together as a band? How did you recruit the other band members?

Dan Orchard, the drummer, I’ve known for a few years, and we were coming off a project when this show happened. Mark White, the guitarist, I had known from a different project some years back and I asked him to play in it and he was interested. Therese and I have been dating for about four years, so it all just sort of worked out.

What sort of music do you play?

Every song we play, we try to make it a party song. We have a base in country and rock, but we also do some pop. We’ll do some funk. It’s kind of funny, because at some shows, we’ll go from Alan Jackson to Billy Idol to Bruno Mars! We jump all over the place.

Do you have a favorite genre?

What are a couple of songs we might hear on your playlist next Friday?

“White Wedding”, by Billy Idol, “Hicktown”, by Jason Aldean. We do “Chattahoochee”, by Alan Jackson. We do “Plush”, by Stone Temple Pilots.

How long have you been playing?

I moved to Champaign and started playing open mics when I was 18. I didn’t start playing for money until about three years ago.

You came from a musical family?

You and Therese have this project as well?

Yes, we have a duo called ‘Mid-October’, and we’ve been doing this for the past three or four years.

And you two are still in a relationship?

Oh yeah, we’ve been together for about four years now. When I met her, she had never played bass before. She had played flute in high school and piccolo in the Marching Illini. She had never played bass before she auditioned to play for one of my projects, and I didn’t notice that she was picking up the instrument for the very first time on that day! Now she plays bass in three different bands! <smiles>

How long do you see yourself doing this?

I would love to play gigs until I can’t anymore. I’ve worked a lot of jobs, but this is just something I’m passionate about. I know we’re not making a ton of money, but we’re doing well. We gig every weekend. I really love it. We all have a lot of fun together. The dynamic of the band is like we’re siblings, so we all get along really well. I feel like we’re musically intelligent so we can kind of navigate through this world kind of quickly.

There’s not been a lot of turnover in the band?

No, we had two guitarists at first, but we had to part with one, but other than that, we’ve been the same band since the start. We’ve thought about adding a keyboard player or a second guitarist, but we just haven’t because we’re apprehensive about chemistry.

What can the folks who come out to hear you on Friday night expect?

A good time! We try to be really spot on with all our technique and sound! We don’t do a lot of slow songs, so ultimately, from beginning to end, we’re going to be bringing a lot of energy, a lot of up tempo.

Back to school letter from ROE Superintendent Thompson