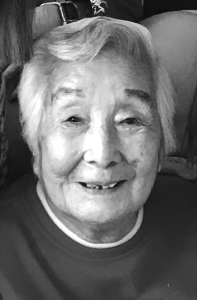 A Private Family Service will be held at her gravesite.

Grace was born in Mountain View, California to Kenichi and Tamiye (Tsuchyama) Morioka on November 22, 1919.  She graduated from Roosevelt high school in Los Angeles with honors and was denied access to higher education due to World War II. During this time, she was relocated to the internment camp in Poston, AZ where she shared her creativity and artistic talent to make many things from very little. She was permitted to join the love of her life as he was on leave from the 442nd division. On January 8, 1943 at Fort Sheridan in Highland Park she married Tommy S. Homma. During the remainder of the war she shared with others her accomplished seamstress talents. After the war, she worked as the office manager for the cardiologists Dr. Cape and Dr. Last for over twenty-five years. During her golden years, she enjoyed spending her days with her grandchildren and great-grandchildren, following their activities across state.

Memorials may be given to Japan House (https://japanhouse.illinois.edu/make-a-gift) at the University of Illinois.

The family of Grace wishes to extend our sincere thanks to Kayce Hanscel-Director of Brookstone Estates of Tuscola and her entire staff along with Jake Reifsteck of Joines Funeral Home in Villa Grove.