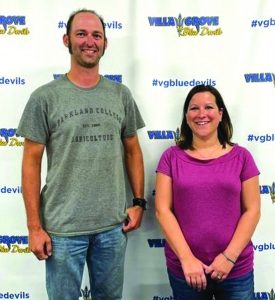 Submitted Photo
Charlie Mitsdarfer and Kristin White after giving their oath of office to the Villa Grove Board of Education.

By Kendra Hennis
The Villa Grove Board of Education meeting was called to order at 6 p.m. on Monday, July 19.

The board’s first order of business was confirming the appointment of Kristen White to fill the vacancy on the board. Following, White and Charlie Mitsdarfer gave their oath of office.

Following approval of the consent agenda, the board heard the Superintendent’s Report read by President Jim Clark in Munson’s absence. Munson explained that the school was still awaiting guidance from the CDC and ISBE for the next school year, but noted that they had began discussion and planned on a meeting before school begins to approve a plan. On this, Principal Bobby Beck noted that the current Return to School Plan was much less intense than last year, and that they are planning on resuming full time instruction five days a week.

Principal Beck then provided his report to the board, noting that online registration was still available on teacherease, and apologized for any delays in registration due to updates on the website. He then said that the website redesign is going well and in its final steps, and that the school’s app has been approved by Google and Apple and will begin development soon. Beck said that the app will be very helpful for providing schedules and communication with students and parents. Junior High and High School Principal Sara Jones was absent and did not have a report.

The board also:
* Approved the minutes of the June 21 regular board meeting as well as the July 5 and 7 special board meetings.

* Approved the closed session minutes of the June 21 regular board meeting as well as the July 5 and 7 special board meetings.

* Approved authorization of the payment of bills.

* Approved the first reading of PRESS Plus #107.

* Received report that the new buses had arrived at the school.

* Approved the extra duty and coaching assignments for the 2021-22 school year.

* Adjourned until the August Board of Education Meeting.