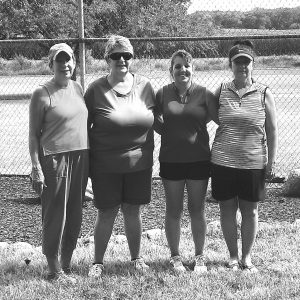 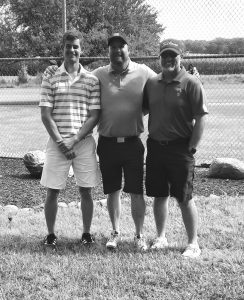 By Tony Hooker
Tri City Country Club hosted their annual club championship over the weekend, and for the second year in a row, Jason Watson won the coveted championship flight title, firing a two-round score of 144 to score a four-shot victory.

Toby Ring, who fired a 148 in regulation, took second by defeating Michael Holmes and Paul Wright in a playoff. Holmes then birdied the second playoff hole to finish third.

Debbie Cox fired an 87 on Sunday to overcome a four-stroke deficit and defeat Jody Myren 178-184 to take the ladies championship flight.

Eric Douglas posted a strong 76 on Sunday to win the men’s “A” flight by three strokes over Aaron Mendoza. Douglas fired a 158 for the victory. Mendoza’s two-day total of 161 nudged out David Dowler, who finished third at 162.  Dowler, with a Sunday 78, was the only player in the flight other than Douglas to break 80 during the two-day tournament.

Women’s “A” Flight was won by Mary Lou Payne, who fired a 93 on Sunday on her way to a two-round score of 195 to beat Boots Blaney by a single stroke. Mary Burnett’s 206 earned her a third-place finish.

Men’s “B” Flight was won by George LeFaivre, whose 169 total was 3 strokes better than Barry Price, who earned second with a two-day score of 172. Three golfers, Steve Cain, Matt Waldrop and Rich Henson, fired 177’s to tie for third in the flight.

The Women’s “B” flight saw Susie Henson fired a second round 104 to take first place with a score of 215, good for a 14-stroke win over Jennifer Appleby. Karen Riddell’s 233 was good for third in the flight.

Jeff Raymer shot an 87 on Sunday to win the men’s “C” flight by three strokes over Davin Smith. Raymer’s two-day total was 182, while Smith fired a 90 on Sunday to finish at 185. Michael Stevens took third place by shooting 95-92 for the two-day event to end at 187.