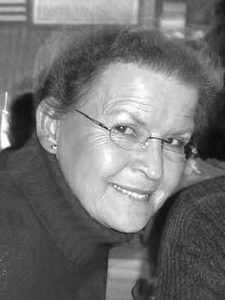 A private graveside service will be held at Smyser Christian Church Cemetery in rural Gays, IL.

Myrna graduated from Villa Grove High School. She attended Murray State and Eastern Illinois Universities where she studied art. She was a stay-at-home mother for several years. Myrna then worked in several financial institutions before founding Farm Business Consultants, Tuscola, IL, which she owned and operated for over 20 years.

After selling her business and retiring, Myrna turned back to her artistic interests. She became a master artist in spinning, weaving and knitting and honed her skills through courses at a variety of venues including the John C. Campbell Folk Art School at Brasstown, North Carolina. She was the recipient of a 2021 Illinois Arts Council Agency Ethnic & Folk Arts Master/Apprentice Program Award. This program helps communities preserve their own culture by providing for a master traditional artist to pass on their skills to a qualified apprentice in a time-honored method in order to preserve Illinois’s exceptionally rich cultural heritage. She was an active member of the Champaign Urbana Spinners and Weavers Guild, the Five Mile House Foundation of rural Charleston, IL, and the Amish Heritage Center near Arcola, IL.

Myrna was a member of the Tuscola Rotary Club, serving as the club’s first female president in 1995. Myrna traveled to Nice, France for the 1995 Rotary International Convention. While in Europe, she was able to research her Rochat family genealogy and tour in Switzerland. She was a life member of the Switzerland County Historical Society where she participated in the maintenance and preservation of the Vevay, Indiana area. She served Heritage Community Unit School District #8 as Treasurer for 26 years. Myrna was the founding leader of The Corner 4-H Club in southeast Champaign county and remained active in 4-H on county, state and national levels for over 20 years. She was a member of the Immanuel Lutheran Church, Broadlands, IL.

Online condolences may be shared via www.hilligossshraderfh.com