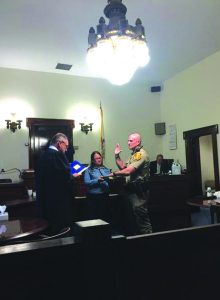 To the Residents of Douglas County:
Effective July 1, Sheriff Josh Blackwell and Chief Deputy Steve Pollum stepped down from their positions in the Sheriff’s Office. I expressed interest in assuming command in the event I would be needed, and as a result of these retirements, that need has been created. I thank both Sheriff Blackwell and Chief Deputy Pollum for believing in my ability to lead this department in light of their absences, and wish them all the best in their future endeavors.

My appointment as Interim Sheriff on July 1 was immediate, however, it is the duty of the Republican Committee to determine who will complete the term that Sheriff Blackwell was elected to serve. The Committee will make a recommendation to the Douglas County Board on a permanent replacement, and the County Board will decide who will finish the term. It is my intention to seek out the remainder of this term so that I may address further reaching issues beyond the scope of this interim appointment.

In one of my first actions as Sheriff, I have hired Adam Weinstock as my Chief Deputy. I met Adam through the Douglas County Tactical Patrol Unit, and through interactions with him as the Chief of Hindsboro. Chief Deputy Weinstock has an extensive history in law enforcement as well as operating his own business. Chief Deputy Weinstock is very motivated, and I believe he will be an asset for the department moving forward.

For those of you who convinced me to put my name forward, I thank you for your support, and hope I make you proud. This is not an appointment I take lightly.