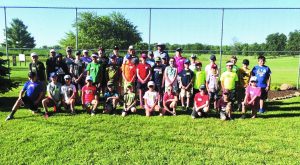 Submitted Photo
Campers at the Tri-City golf camp. The camp was held for thirty-eight kids between 8 and 18.

By Tony Hooker
Jason Watson was quick to point out that the focus of the interview should be on the kids, and not on him. After all, he was just trying to do his part to give a little back to a game and a golf course that has given so much to him. I recently sat down with Watson, an area farmer, to talk about the recent youth camp that he, along with many others, had organized.

How long have you been involved in the youth golf camp?

This was our first golf camp that Tri-city has put together, so this was kind of a maiden voyage for us. As a kid growing up, we had a handful of parents who would come out and do something similar for us. Maybe not so much in a camp style format, but they would help us learn the rules of golf, and etiquette and how to get around on the course. It’s something that I remembered as a child and it stuck with me and I kind of took it to the next level this year.

Obviously, you grew up playing the game?

I did. I’ve been fortunate enough to have some time going out with my dad here at the club (Tri-City) and really made a lot of memories. My closest friends growing up were a group of boys that spent our summer days out here golfing. It carried with me. Golf has provided me with a lot of opportunities. I golfed in college, and even in the business world, being familiar with a set of golf clubs doesn’t hurt you! <smiles>

Where did you play collegiately?

I golfed at Parkland. After playing at Villa Grove, I played two years at Parkland and had an opportunity to continue playing at Illinois State, but I knew I wasn’t going to be beating Tiger Woods, and with my competitive nature, I decided to go the academic route instead. Still, some of my closest friends work in the golf industry. Many of my closest relationships came through golf.

How was the camp structured?

One of the unfortunate things about Tri-City, something we’re trying to fix, is to get a little better practice area, so we’re a little bit limited for space. We had 38 kids sign up for the camp, and we structured it from the hole backwards. Until you can get those short putts in the hole, it’s a complicated game. We spent the first day just working on putting. The second day we did chipping and pitching. Then, on the third day, we did whole swing instruction, and then on the last day we let the kids go out and play a round.

You say we. Who else was involved?

The whole board and the whole club really put this together. I was blessed with a ton of volunteer support, so the list of names to thank would go on endlessly. A lot of the Women’s league came out and helped me chaperone kids and keep an eye on things, and a few other men’s league players came out and joined me for one day. It was fun. The kids were just excellent. I was asking for a lot of patience because golf can be a frustrating game, and there was a lot of downtime in golf, and the kids really liked it. We lined up in long lines and the kids were very well behaved and attentive. I was nervous about where it could go, but it went very smoothly.

What was the age range of the kids?

Did you see anyone who seemed like a natural?

There’s a lot of natural talent out there. I think we also opened some kids’ eyes to the fun of the sport. My intent of the camp wasn’t to turn them into Tiger Woods overnight. We wanted to come out to the course and be able to play with the parents or, when they’re old enough, come out and play on their own. I really tried to focus on the etiquette, the rules of the game, while creating fun little games that the kids can practice at home. “Pick out a tree and practice chipping close to it. Come out to the putting green and don’t just be knocking putts around, but be practicing with a purpose. I think we learned some really fun things and ways for the kids to come back out here and practice on the green.  We wanted them to get the challenge of golf, but do it in a beneficial learning structure.

Do you see this morphing to a place where it’s helping varsity golf at VGHS?

Yes, I have a lot of plans. We had to find a starting point and lay a foundation, but I want to eventually take this into a junior day out on the course. Maybe a Thursday afternoon, where kids can set their own foursomes and I’m out bouncing around from group to group chaperoning. First things first, however. We had to learn the basic fundamentals and etiquette and the desirable traits of what it takes to come out here and be a member of the golf community here. We want them to know how to let people play through if they’re being slow. How to be ready when it’s not their turn. We wanted them to know that golf is fun. It’s not as boring as it looks on tv! <smiles> We also tied in a lot of life’s lessons. Honesty, integrity, competing against yourself. All the life qualities that I think golf brings out. There’s a lot of stress and emotion. Golf can be a frustrating game. It’s something that you can learn a lot of life lessons through learning golf. I tried to draw the characteristics of that back to the kids when I could.

Projecting forward, do you see this possibly beginning a Jr High team that can strengthen the high school program?

You got my gears turning a bit there! <laughs> I don’t know much about junior high-level golf and what they have. We have to rejuvenate the club and keep young kids golfing.  As I was growing up, golf was a family event and we would go out and play together. I talk about this in business. When you’re on the golf course, you’ve got four hours where your showing your character, your attitude. How you deal with frustration. How you deal with challenges. That’s four hours you get to spend with your families or your buddies. It’s four hours where you can impress a client or your boss. There are lots of ways that golf comes back to life. I just want to pique an interest in these kids to learn the game young. As we were talking about, it’s tough to learn the game when you’re older. It’s pretty embarrassing to hit a bad shot or even swing and miss when you’re an adult. The cool thing is that an eight-year-old will just go up there and swing again when they miss it. To be able to still have the attitude that it’s just about getting it in the air and they don’t care if it’s their first swing or their second. An adult doesn’t do that. They want to give up their clubs and give up the game a week later. That’s why I think it’s very important to try to introduce them to the game while they’re young, adventurous and energetic. I think that building a foundation for these kids. That’s the ultimate goal. We’ve got so many new ideas for next year’s camp and how to make it better. As these kids progress, it will be easier to get into more in depth stuff. I would like to do it for the sport of golf. I would like to do it as a way to return the favor to the club where I grew up and learned to enjoy this, and I would like to do it for the athletes that want to pursue golf as a high school sport, so there are multiple facets involved.