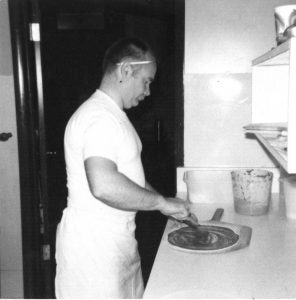 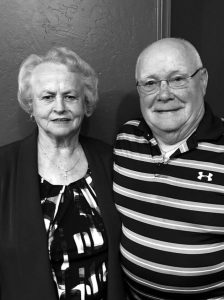 Sid and Marty Shanks of Villa Grove have two big reasons to celebrate – this summer marks their 65th wedding anniversary and their 50th year in the pizza business. The Shanks’, who married on July 8, 1956 in Waveland, Indiana moved to Central Illinois with their five children in 1965 where Sid pursued a new job at Magnavox. With five young kids at home, Marty had been working multiple part time jobs including making pizza dough for one of the first pizza restaurants in Champaign/Urbana. When the Magnavox plant in Urbana closed a few years later, Sid and Marty took the opportunity to try something they had always wanted to do – be in business for themselves while creating a family-friendly restaurant and a place for young people to gather.

“I went to the bank in Villa Grove and asked how much they would lend me to start a pizza restaurant. I basically had no assets so I was told that they could only loan me $3,000,” stated Sid. Shanks has joked for many years that the bank didn’t want his wife, kids or the dog as “assets.” The Shanks’ were up for a challenge and took on the difficult task of buying equipment, renting and renovating a building, furnishing it and purchasing inventory for their opening night…all within the $3,000 budget.

Opening day for Blue Devil Pizza in April 1971 was staffed by the entire Shanks family and one other paid employee, Mary Piercy. Villa Grove residents welcomed the business with open arms. The line at the door on opening day stopped only after all their inventory for making pizzas was exhausted. Sid said later that he thought he’d ordered enough for a week’s sales.

For several years, the restaurant was staffed primarily by the Shanks family. Mark Shanks, the youngest of the Shanks children, was eight years old when he started working in the pizza business and continues today to be a key player in the success of the business. All of the Shanks’ children and several grandchildren have worked in the businesses. Over the years as the business grew, many Villa Grove youth worked part time jobs at Blue Devil Pizza. It was also the popular place for teens and families, with long waits for tables after sporting events.

Building on their success in Villa Grove, they grew the business by opening restaurants in other small Central Illinois communities. They eventually incorporated and became Pizza Man, Inc. After several years as an independent, they teamed up with the Monical Pizza Corporation and began converting their locations to Monical’s franchises. Today, the company operates five franchises in small communities throughout Central IL, will sell over 7 million dollars in pizza this year and employs almost 200 employees.

The pizza business has been very successful for the Shanks family and they have given back to the communities that they serve, donating to churches, schools, feeding sports teams, etc. “Dad always taught me that if you are good to the community, it will be good to you and that business strategy is still serving us very well today,” stated Mark Shanks. Marcia Riggs, the Shanks’ oldest daughter said, “Working in a family business teaches you structure, time management, customer service and instills a great work ethic which is invaluable.” Riggs is a NICU nurse at Carle Hospital. Their other children include Mike (Cathy) Shanks, a mechanic with the State of IL, Sharon (Dave) Jackson who recently retired as the Manager of the Heart Center at Sarah Bush Lincoln and Mark who helps Sid and Marty run the corporation and manages the Shelbyville Monical’s. Their son, Steve Shanks, deceased, also worked in the business and later for a restaurant supplier.

Sid and Marty have often expressed appreciation for all the support that they have been given in the communities where they have served pizza for the past 50 years. To celebrate the anniversary of their 50 years in the pizza business and their 65th wedding anniversary, the Shanks children are hosting an open house at the Monical’s Pizza in Villa Grove on Sunday, July 11 from 1:00-3:00 p.m. If you are unable to attend, send your well-wishes to: Monical’s Pizza, Attn: Sid and Marty Shanks, 102 N. Sycamore, Villa Grove, IL 61956.