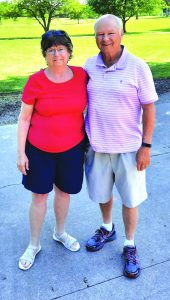 Photo: Tony Hooker The Pieskes at Tri City Country Club, which was once their family’s farm ground.

By Tony Hooker
From its earliest days, the Henson family has had a tremendous impact upon our city. I recently caught up with Mark Pieske, one of six living heirs of an unknown Henson, whose home, the “Villa in the Grove” inspired the name of our town. We talked about the magnificent dwellings his family built, about the amazing charitable gifts they’ve made to the community over the years, and a great many other things.

Did you grow up here in Villa Grove?

And did you graduate from Villa Grove High School?

Yes, I graduated in 1969. I was born in Urbana, but my parents lived here in Villa Grove, so I lived here all the way until I went to college at SIU-Carbondale. I took a job in Decatur at Illinois Power.

What are some of your early memories, growing up? Did you live in one of the big houses your family built?

Only temporarily. I lived in my grandfather’s house at 202 N Henson Road at the time when we sold our house on Vine street until we got our house built on Hawthorne drive. It was a temporary stay for my mother and I.

For me, I just can’t imagine what they must have looked like to someone coming in from the country. Did you ever hear any correspondence from those days about what an impression those homes made on visitors to Villa Grove?

They were beautifully maintained, and it just makes me sick to drive by my grandfather’s house at 202 Henson road. It makes me sick because it’s been deteriorating for years. There was a caretaker named Guy Huls who lived in an apartment above the garage. It was beautiful, and the house across the street, the “Villa in the Grove”, was obviously a well-maintained home, and then down here around the corner was Gladys Henson’s house after her parents died.

How are you related to Gladys?

We would be third cousins.

I went to high school with Jeff and Denise Henson. Are you related to them?

No. As generations passed, the family got smaller and smaller. My mother was one of two children. Her father, John Henson, was one of two children. One bit of trivia is that there are basically six descendants living in the Henson family. I have a first cousin who lives in Florida, and my wife and I have two children, and my cousin had a child who had a child, and basically there’s six of us living, because Nadine Ferguson passed away a little over a year ago.

In reading the document you sent me, and it kind of amazed me. George had several children, some of whom passed away as children, and then there were “the aunties”, who never had children. You would think that having that many children, there would have been all these branches, but that’s not really the case, is it?

Do you remember the aunties?

No, they passed away before my time.

Which house did they live in?

George built the “Villa in the Grove”, and Gladys built the House just south of town?

George built the Villa, but Gladys’s parents, Milton and his wife bought that house from another party.

One thing that’s apparent is the sense of charity that your family has always displayed. We’re sitting in the Tri-City Country Club, and the land on which it sits was gifted by your family. It sits near Henson Park, another gift from your family. Where do you think this sense of giving came from?

When they came here in the 1850s, land was cheap so they acquired thousands of acres. The subdivision, Hawthorne drive, was Henson land. A lot of it was timber before they developed the subdivision that sits here now. They had a lot of livestock, as well.

You worked at Illinois Power. Are you still working there?

No, I retired approximately 13 years ago.

And what was your role, sir?

I was an accountant. I worked in the accounting department and also had opportunities in finance. So, I worked in management reporting, accounting and finance.

Do you still live in Decatur?

Yes, I met my wife there, and we still live in the city of Decatur.

Are any of the Henson descendants still living in the area?

I’m the closest. There’s only six of us, and our two children live in the Chicagoland area. My first cousin Susan lives in Florida, and her child lives in Chattanooga, TN with their child.

What stood out to me is that there are no longer any descendants whose last name is Henson. Who was your great grandfather?

My great-grandfather was Shelton Henson. He’s the one who started the First National Bank. They had the two boys, John and George. John was my grandfather. Shelton’s father was also named George, and he was the one who really came to Villa Grove first.

Where did they come here from?

They came from Indiana and before that he was in Kentucky. My grandfather was a long-time mayor of Villa Grove. He was active in the Douglas County Democrat Party.

They had farms and livestock, and then they built the bank? Were those their main sources of income?

They helped establish the Methodist Church?

You mentioned the aunties earlier, and one of them donated two lots for the church to be built upon, and due to an overheated furnace, they had a fire and had to rebuild. The Henson family has supported the Methodist Church over the years, the stained-glass windows, the organ. My grandmother had an area built to store the choir robes in. George Henson’s wife Elizabeth left money for the new edition to be built. It’s called the Henson New Life Center. The family has supported the church for some time.

What are some of your favorite memories of those houses?

I do have a lot of fond memories of being in that house. There were two bedrooms on the first floor, and then upstairs my mother and her sister had their bedrooms. I know my mother had a match collection in the closet. Her sister Jean had posters of movie stars in her closet. Upstairs there was a game room with a pool table and the basement was my grandfather’s workshop with all of his tools. There were a lot of antique tools down there. There’s a doll house that my grandfather made for his two daughters that still sits there.

Being a small town and small school, I believe we had about seventy-five in our high school class, we got to know everyone. To this day, I still have connections with people I consider my good friends who were classmates. We do the reunions every five years and there are about eight of us who still do the alumni golf outing. It was just a wonderful community. I lived near Harrison park as a young boy and I can remember going to Harrison Park with my friends, playing on the equipment, trading baseball cards, riding the slide and everything. I have a lot of fond memories of growing up on Vine Street and of growing up here in Villa Grove.