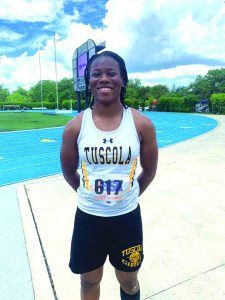 Photo: Tracy Hornaday
Alyssa Williams returned from the IHSA girls state track meet all smiles, with three gold metals and a new school record in hand. Williams came in first in long jump, the 100-meter dash, 200-meter dash, as well as sixth as a member of the 4×200 meter relay team. 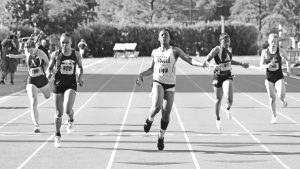 Photo: Tracy Hornaday
Alyssa Williams finishes in the front of the pack during the 200-meter relay at the IHSA Girls State Track Meet at Eastern Illinois University.

By Lenny Sementi
It’s been a big year for Lady Warrior track star Alyssa Williams and this past Thursday she showed the entire state what everyone in Tuscola and Central Illinois already knew, she’s explosive and when pushed she responds. The junior crashed the state meet entering seeded first in two events and second in another and left Eastern Illinois University with not one, not two, not three but four medals in tow, three of which were gold.

Williams broke the school record in the 100 and 200 meter dash repeatedly from the first week of the season to the last. “I really didn’t expect to win all three,” she said. “But I was going to give everything I had and it all worked out.”

All of this came on the heels of an eight-week football season. Yes, you heard that right, Alyssa has been part of Tuscola’s football team the past three years and put her time in this season as a defensive back and scout team running back. To say she is tough is an understatement.

She opened the IHSA State meet winning the long jump with a leap of 5.57 meters besting St Joe Ogden’s two-time defending state champ Atleigh Hamilton. Williams backed that up with a first place finish in the 100 breaking another personal and school record crossing the line in 12.10 seconds.

She then joined up with teammates Brynn Tabeling, Mia Hausmann and Laney Cummings in the 4×200 meter relay and they responded with their best time of the year collecting four team points, a sixth place medal and All state Honors. “Honestly the relay may have meant the most to me,” stated Williams. “Because it was with my teammates, especially the seniors we’re like family, it was just a great way to end the year.”

They were less than a second off the second place team in a highly contested race. “It was amazing to be able to run against the best competition in the state,” commented Tabeling. “Especially with some of my friends. Winning a state medal has always been a dream of mine and it’s great that I was able to mark it off may list.”

Those four points were as big as any vaulting head coach Drew Sterkel’s Lady Warriors past perennial power St. Joe Ogden by a mere point edging the Spartans for fourth place overall scoring 34 points after the dust settled. Williams put a cherry on top adding the last ten points to team totals winning her third state title at the end of the meet winning the 200-meter dash with a personal and school best time of 25.34 seconds.

“I’ve been blessed to be a part of many amazing events but this day may make the top of the list,” stated coach Sterkel. “I’m so proud of the Lady Warriors track team. Alyssa was at the top of her game, she competed like the champion she is.”

When asked about the day Williams’ toughness showed true, “The last race, the 200 was the hardest, the heat and exhaustion that came with it because of being in it all day had started getting to me. I was tired but knew my competitors were going to push me, I’m just glad I responded the way I did.”