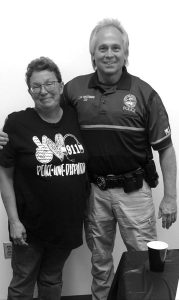 Submitted Photo
Chief Hastings with Debbie Cook at her retirement ceremony from the Douglas County Sheriff’s Office. Debbie has provided the citizens of Douglas County with 28 years of dedicated service as a telecommunicator.

By Craig Hastings
I was invited to yet another “Going Away” get together last week. This one was held at the Douglas County Sheriff’s Office. I mentioned in this column last week how many people, good people, are currently leaving the profession of Peace Officer (Police Officer) in record numbers in order to beat the July 1 start up date of the Illinois Democrats sponsored Police Reform Legislation. I’ll not say anymore about this incredibly reckless and anti-police legislation for now. As the next few months proceed, focus your attention to the news in cities such as Chicago, East St. Louis, Peoria, Danville, and Champaign/Urbana. It’ll take some time for statistics to accumulate related to the rise in crime in most all communities but, if some “clean up” legislation doesn’t follow soon, your safety will be at a greater risk than anytime in your life in Illinois.

Enough of that. So who was I going to bid farewell to this time? This one hurts. Understand this, the police officers out in the cars, the front line, are only as safe as the quality of the dispatchers working with them on the radio communication side of law enforcement. And dispatchers are law enforcement in every sense of the word other than they have no arrest powers. I’ve known plenty of them though that should have or could have. Last Wednesday I had to say my last 10-42 (off duty and out of service) to my friend and thirty-five year co-worker, Debbie Cook. I think we all have a tendency to take for granted that the good people, who are also good employees, will always be there when we need them to be. I absolutely was thrown a curve ball that I swung and missed when I was told that Debbie would be leaving. I would have said, “No way!” I had only learned of this about a month ago. I’ve been a police officer in Douglas County for forty-one years and have seen many dispatchers come and go.

Most of us out in the field on patrol will usually always have our own “go to” dispatchers. This is the one you might call on the phone and ask a question about how we enter information on our computers in order to get the correct information back. This will be the dispatcher that knows what you mean before you know what you mean when trying to figure out the numerous pages of information we sometimes get scrolling in our faces in our cars over our computers. Over my career Chuck Martin was my first hero dispatcher and savior when I started in 1979 as a part-time, know nothing, by myself, on midnights, and scared to death I might do something wrong, rookie police officer working for Tuscola. In 1979 our training as a part-time officer consisted of a weekend of firearms training in Pesotum, a revolver you had to buy yourself, a couple of used uniforms, and a “Go get em tiger” from the boss and off to patrol you went. Me, many times over night by myself. What a difference a few years makes. I went from almost zero training required in 1979 to now in 2021 where people that have zero experience as police officers tell police officers how best to do this job! And what they’re telling us is how best to screw up the system that has worked for sixty years!

Next up after Chuck was Mary Hopkins. Mary was my second go to dispatcher for all things I didn’t know or couldn’t figure out. Then….along came Debbie Cook. Who? Nope I didn’t know Debbie until she became a dispatcher. However, it didn’t take me long to see this was someone who was going to do well, very well, as a law enforcement dispatcher. Understand that there have been and are still really good dispatchers that have taken a seat behind the microphone in the Douglas County Radio Room. But, most police officers have their favorite(s) for many different reasons I suppose. Many years have passed. Enough years that it feels as though I have spent most of my career with Debbie working as a dispatcher. I can’t remember not working with her. I have that same all alone eerie feeling that I had when Joyce left me as my forever secretary at TPD.

The positive side of any of the employee departures in my career is that someone just as good steps up and moves in to make sure I’m doing my best. It might take a few people giving it a try before the one that’s “just right” is found but, so far it’s worked out for me in my career. I’m confident that the personnel working the dispatch desk at Douglas County will recover from their loss of having Debbie around full time. Will I need to discover that “go to” dispatcher to replace Debbie for me or could it be that I’m close enough to leaving this profession behind that I won’t have a need to do so? We’ll see what the next few months of working with the changes, constraints, and ridiculousness of how police do their jobs before I make up my mind. I want to stay, I really do. I certainly can still contribute to a better and safer Tuscola for a few more years. I enjoy the people here in Tuscola and I enjoy working for our Mayor, City Administrator, and Council members who collectively oversee how we perform at the police department. However, I don’t know how many more pieces of the puzzle I can lose, (Joyce and Debbie) before figuring out isn’t any fun anymore! Debbie Cook, I wish all the best for you and your family! God bless you and thank you for looking out for me during our thirty-five years service together. Only thirty-five! Lol! 10-42.

(The views and opinions expressed in the submitted columns are those of the author and do not necessarily reflect the position of The Journal.)