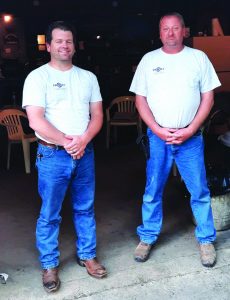 By Tony Hooker
Like most Villa Grove men who chose to work in the trades, David Frost and David Wyant got their start in high school at Villa Grove, under the watchful tutelage of Mr. Sergent and Mr. Marcus Harris. The two longtime craftsmen have recently paired up to form Frost Electric, Plumbing and Heating. I recently caught up with the two Davids and we discussed their new business, their roots in the industry and much more.

What is your service area?

Have you always wanted to have your own business?

How long have you been in the industry?

And how about you, Dave?

<DW> I’ve had my own company in the past. It’s nice having a trusting partner. I’ve been in the plumbing industry for 30 years.

Obviously, you’ve put a lot of thought into this, purchasing your shop and everything. Do you see a real need for a local, multi-purpose construction company?

How did you two come together to form the company?

<DF> It was pretty simple, really.

<DW> We’ve known each other for a long time. We do the same thing, basically. I mentioned to him that whether it’s electrical or plumbing, it’s the same thing. We use the same tools, so if we could put ourselves together we could save ourselves some money and go after both. <Plumbing and Electrical projects> . It makes it easier to go after. You’ve got a good chance to get at least one of the jobs, but you can go after both.

<DF> We’re pretty well versed, too. I do from residential to light industrial stuff, and Dave’s the same way.

Are you both bosses? Is there a president of the company?

<DW> He’s the owner/operator, David Frost. David Wyant covers the plumbing side of it. The future goal of this whole thing, with me being the older guy at 52, is to figure out how much longer I can be out in the field. I’ll still do prints and stuff as I get older, but he’s going to apprentice under me, so that as I get older, he’ll still have a plumber on board. He’ll still hire what he needs, and we would love to get some younger kids started. That’s our goal, some of the younger kids who have missed the building and trades class. We both had it, my son had it, and it’s not out there anymore and it stinks. It would be tough for it to make it with the price of lumber today. We’d love to get these younger kids involved. We’re both well known to Mr. Gilles there at the hardware store (Gilles True Value, in Villa Grove) , and he’s got some young ones that he brings in and hopefully some of them will want to get a start in the trades.

Nice. That’s a great thought. Is that, the giving back and building something that will last, what’s been in your mind, David Frost?

<DF> Yes. It is. We need to teach the kids trades, because they aren’t taught anything like that in school any more.

Do you see regular, steady growth in hiring in the future? Do you have a business plan for that?

<DW> That’s definitely part of the business plan. We want to accumulate more people, giving them a decent job with decent pay. We want to be affordable to the customer while at the same time we’re starting and building a business. It’s probably not the best time to start a business, but Villa Grove didn’t have anything like this. The first thing is that any plumber should be licensed, insured and bonded, with a contractor’s license. That’s what that plaque up there on the wall is. It took us a while to get it with the state of Illinois being closed down, but we’ve gotten through that process and now we’re completely legal. If we come to your house, we’ve got everything we’re supposed to have to do it right.

David Frost, how many years did you say you’ve been in the trades?

<DF> I started out in carpentry. I did plumbing. I worked for a pipefitting business. I did HVAC <smiles> and I’ve been an electrician for 12 or 13 years.

So, this just seemed like the natural, next step?

<DF> yes, to work for ourselves.

In that regard, are things going pretty well? Are you getting a lot of attention?

<DW> I would say yes, and the scary part is that we’re expecting much more.

<DF> Yes, we worked with the Elstons on their new home. We’re working on an addition in Philo, plus a few things in Champaign.

<DW> As a plumber, I have to do continuing education every year, and a long-time Champaign plumbing inspector is now teaching it, showing us all the new updates. A guy I apprenticed under is now the Urbana plumbing inspector, so it’s like a big family of plumbers out there, although some of them are like the ugly step-brother that you don’t have much to do with! <all laugh> We all learn from each other.

You graduated from Villa Grove?

Five years from now, do you think that you’ll be able to be in the office a bit more, bidding jobs?

<DW> I hope that I’ll still be physically able to be out there in five years, but you never know. When you get to a certain age you start realizing it. I had to have knee surgery last year, but I foresee this being something where if this doesn’t work, there will still be a need in this town.

And you David? (Frost) Five years from now you’ll still be plugging and chugging?

<DW> In five years, hopefully he’ll have his plumbing license too because that gives us a chance to get some of these kids into an apprenticeship program, where four years later, they can pass their test and if they pass it, they can become their own business man. It’s the same with the electrical side.

Or stay and become your right-hand man or woman?