Submitted Photo
The Smith Family (Ava, Sam, Zoey, Emily) were joined by friends and family on May 16 with a “No More Chemo” parade for Zoey. 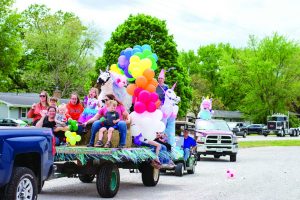 Submitted Photo
Friends of Zoey’s lined up for a parade to celebrate “No More Chemo” for Zoey on May 16. They were lead by the City of Villa Grove Police Department, Fire Department, and were joined by many other floats and golf carts filled with friends and family.

By Kendra Hennis
Villa Grove’s Zoey Smith, age 5, was joined by friends and family on May 16 with a “No More Chemo” parade to celebrate her ending her chemo treatment with all leukemia. The parade began at 2 p.m. at Henson Park and weaved through Villa Grove to end at Smith Seed where she was with her family. There were fire trucks, police cars, and lots of friends and family in the parade. People had floats, golf carts, balloons, horns, yelled and sang. There were multiple unicorn sightings and smiles all around. The Villa Grove Fire Department  had two fire trucks that started the parade with sirens going. The Villa Grove Police Department blocked traffic while holding an adorable unicorn sign. There were multiple St. Jude families who traveled a couple of hours to be there. Family friends made a float with a unicorn made out of chicken wire and tissue paper. People went all out and Zoey loved every second of it.

Zoey was diagnosed with ALL (Acute Lymphoblastic Leukemia) in October 2018 at age two and a half. Her parents had just had her little sister, Ava, five weeks before. Zoey had a cold and some bruises that just would not go away and after requesting blood work her family learned she was sicker than they thought. She was airlifted to Children’s Hospital of Illinois in Peoria on Monday where they got her diagnosis and by Thursday of the same week Zoey was accepted to St. Jude Children’s Research Hospital and the family packed up and moved down to Memphis, Tennessee.

ALL Leukemia has a two and a half year treatment plan. It is broken down into three phases. Phase I and Phase II are both eight weeks long. Phase III however is 120 weeks. Zoey handled Phase I so well that they were able to come back home to Villa Grove and complete the second two phases mostly in Peoria Illinois at the St. Jude Affiliate. These are all weekly trips to Peoria.

“Zoey is such a strong and tough little girl. She handled this challenge with such bravery. She absolutely loves to go to St. Jude Peoria. She calls it her “little toy room”,” remarked her family. “There are so many amazing people who work and volunteer there to make her time there fun. She is never bored, always very excited to go, and loves to play with all the kids and toys.”

They noted that, “We are so thankful for our family and friends who made the parade possible. It was such a wonderful end of treatment surprise for our family! St Jude is an amazing organization who has helped our family so much. We encourage anyone to donate to St. Jude Children’s Research Hospital.”

IDPH updates Phase 5 guidance for businesses and other venues