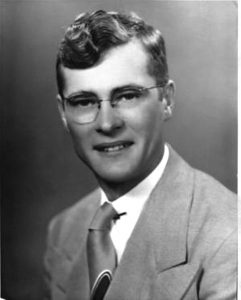 Claude was born July 1, 1931, to Merle and Grace (Beaver) Crane, at their home south of Broadlands

Claude lived at the family home south of Broadlands until 1959, when he moved with his first wife, Ann (Sanders), to their new farm south of Homer. There they adopted a newborn son, John, in 1968. Always in pursuit of more acreage, they moved to a farm west of Hume in 1971. Claude married Martha (Fernandes) in 1976 and continued living on the farm west of Hume until he retired in 2013. They then moved to their home in Newman, where they enjoyed their remaining years.

He was preceded in death by his parents; wife, Martha Crane; and sister, Esther (DeWitt).

Claude’s passion (and career) was farming. He was a proud life member of both the Masonic Lodge and Scottish Rite. He enjoyed being with his family, particularly his grandchildren. His most fond memories are of the tractor drive to Washington, D.C., his farm tour of the Scandinavian countries and trips to Hawaii with Martha. His favorite thing was having meals with the family.

A funeral service was at 10 a.m. Thursday, May 20, at Joines Funeral Home, Newman, with Mr. Jim Allen officiating. Burial followed in GAR Cemetery, Homer. A visitation was held an hour prior to the funeral service. Masks were optional. Dinner was at the Newman American Legion following services. All were invited.

In lieu of flowers, memorial donations may be made to the Newman American Legion or Wesley Chapel Church.