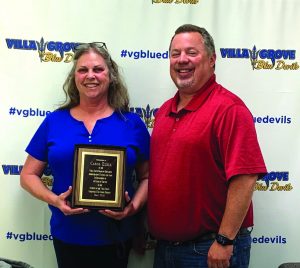 Photo: Kendra Hennis
Former Villa Grove Board of Education member Carol Ezell was awarded with a plaque in honor of her fourteen years served on the board during the May 17 BOE meeting.

By Kendra Hennis
The meeting of the Villa Grove Board of Education was called to order at 6 p.m. on Monday, May 17 with board member Charlie Midsarfer absent.

Following the approval of the consent agenda, the board moved to discussion of the Heritage co-op. Board President Jim Clark notified the board that he found in the Heritage board’s notes that they voted to dissolve the co-op with Villa Grove in August 2020. He stressed that this was never communicated with their board, and that they have been awaiting response from their board for months. Clark then noted that recently Heritage had expressed  in rejoining with the school, but that they would only have five students who participated in the co-op. Due to this, all members of the board felt that continuing the co-op with Heritage was not in the school’s best interest. They noted that if they were to continue the co-op, it would require the school to move to 2A; they have already had issues with communication; and it is a lot of work for the minimal number of kids interested. The board voted to dissolve the co-op with Heritage effective at the end of the 2020-21 sports season.

The board then voted to approve the tentative amended budget on display. Superintendent Carol Munson exclaimed that the budget was within three percent of their projections, and that they are likely to come in under for the school year. She noted that since property taxes were higher than expected,  CARES money was received, and sales tax money increasing was a nice boost. She additionally said that they do not expect any large expenses to change the budget since it is ten months into the school year.

The board then thanked member Carol Ezell for her time on the board, following her retirement after fourteen years. Clark said that he appreciated all of the work that she has done for the board, and as secretary. He said that she has done a phenomenal job over the years and has been involved in a lot  with the booster club, building the concessions stand, and new building. Ezell thanked the board and said that they were a pleasure to work with over the years.

Following, the board approved the five-year review of Policy 4:50 Payment Procedures; Polity 5:270 Employment At-Will, Compensation and Assignment; and Policy 6:613 High School Credit for Students in Grades 7 and 8. Munson noted that these policies were still in accordance with the law and auditors, just a necessary renewal.

Superintendent Carol Munson then gave her report to the board. She began by discussing the Triple I conference in Chicago in November and if any board members were interested. At this time Superintendent, and board members Clark and Jones are interested and will be signed up. She then announced that the school had been awarded three years worth of funding in the amount of $30,000 from the City of Villa Grove. Munson then discussed the Egyptian Rate Renewal for health insurance at the school. She noted that currently only three (soon to be one) employees use the increasing insurance that they were exploring their other options for a better rate. She also noted that the board needed to begin advertising for the open board seat. The board has 60 days to fill the vacancy on the board and interested applicants can submit their letters to the board email or to the VGHS office.

Principal Bobby Beck began his report by congratulating students of the month Roman Renfrow (kindergarten), Jayce White (first grade), Ella Uptmor (second grade), Addi Schmidt (third grade), Makaylin Pugh (fourth grade), Carter Dowler (fifth grade) and Alex Esteban-Raymer (sixth grade). He then thanked Ms. Cardiff for the great music concert for first through third graders, noting that it was available on the school’s Facebook page. Beck noted that they had a successful  Ag Field Day on May 6, School Safety Meeting on May 7 and Blue Devil Classic on May 13. He said that the summer recovery program was planned for June 2 through 18 for students to attend. Information has been sent to parents for interested students. He also noted that the school was working on updating their website and partnering with a company for app compatibility. He said that this would be really helpful for students and parents by providing push notifications and texts, and that the school planned on a July 3 release date. Beck then noted that upcoming events at the school included: Finals May 16 – 21; Kindergarten Park Day on May 18; First Grade Park Day on May 20; May 21 is students last day; May 24 is a Teacher’s Institute and Retirement Breakfast; May 25 is a Remote Planning Day; Eighth Grade Promotion is May 27 at 7 p.m.; and High School Graduation is May 30 at 2 p.m.

Junior High and High School Principal Sara Jones followed by congratulating Sara Stutz for being named the May Senior of the Month. She thanked Blake Swan, Marci Howard, Sandy Hill, Gavin Gunter, and the senior parents for all of their help with prom, remarking that the night was beautiful and cleanup was completed very quickly. Jones additionally thanked Mr. Sims for all of his hard work with the Honors Banquet, as well as Mrs. Alexander, Shirley Badman, Terri Jones, Blake Swan, and Mr. Beck. She noted multiple athletic achievements; including many football players being named to All-Conference, junior high track athletes on a great season, and Madie Burwell for re-breaking her school record twice this track season. Jones ended noting some upcoming dates at the school including: May 14 is the last day for seniors to attend, Finals are May 19-21, Junior High Skating Trip on May 20, Teachers Institute on May 24, May 25 is a remote planning day, Eighth Grade Promotion on May 27 at 7 p.m., and Graduation on May 30 at 2 p.m. Jones noted that the seniors wanted to have graduation on the football field and that they had pictures taken in a walk through inside last week.

The board also:
* Recognized visior Dave Ortmann from CTS Group who was there to update them on his personal life and discuss their new contact for the school.

* Opened a public hearing for the Waiver of Limitation on Administrative Costs for FY 2020. Superintendent Munson explained that the waiver was necessary due to a three percent increase in administrative costs from last year since she is a full time employee and Superintendent Norm Tracy was only part-time. The board heard no public comment, the board closed the hearing and voted to adopt the waiver.

* Approved the closed session minutes of the April 19, 2021 meeting.

* Presented the Canvass of Votes and Notice of Persons Elected for board members Charlie Midsdarfer and Carisa Jones.

* Swore in board member Carisa Jones.

* Elected Jim Clark as the returning board president, Bill Fulk as vice president, and Carisa Jones as secretary.

* Set meeting dates for the third Monday of the month at 6 p..m., with exceptions for holidays to be moved to the following day.

* Heard discussion from Principal Beck about handbook changes. He noted that the handbook committee at the elementary school was still meeting about potential minor changes.

* Heard discussion from Principal Jones about handbook changes at the high school. She noted that they were returning to finals based on attendance, and that no major changes were being made.