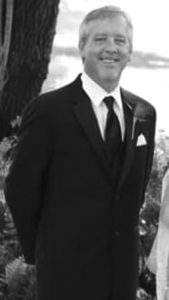 Jeffry Thomas Raaymakers, longtime resident of Champaign-Urbana, IL passed away peacefully surrounded by his family and friends in Ellenton, FL on May 6th, 2021 after a long battle with cancer. Jeff was a devoted father, brother, son, grandfather and friend. He served with distinction as a fireman and paramedic in Illinois before following his passion for woodworking and becoming a master carpenter. An avid outdoorsman, he enjoyed camping, fishing, hunting, boating and scuba diving with his family and friends. Jeff was a masterful golfer who never shot a bogey and as a master angler holds “unrecorded” state records for the largest crappie and largemouth bass ever caught in Illinois and Iowa. A father of three and grandfather of four Jeff was a caring and devoted parent and grandparent. He taught his kids and grandkids many lessons on life and growing up to be caring and compassionate women and men. Later in life Jeff met Margi Baldwin and their exploits are the stuff of legend, from kayaking misadventures to discovering a passion for art. Jeff truly made the most of his time on this earth and left an impression on everyone he met. Today the world is a little less knowledgeable, a little less creative and a lot less compassionate but we rest assured that he is with his daughter Ena again in heaven and that she’s probably still refusing to eat her green beans. Good luck, old habits die hard. We love you more than you’ll ever know, rest easy Dad.

In lieu of flowers, the family prefers donations to be made in Jeff’s honor to the Paul B Sharar Foundation: Ena Raaymakers Ballinger Memorial Scholarship (https://www.eicc.edu/alumni-and-giving/sharar-foundation/) or the Tidewell Hospice in Sarasota (https://tidewellfoundation.org/giving-opportunities/memorial-tribute-gifts/).