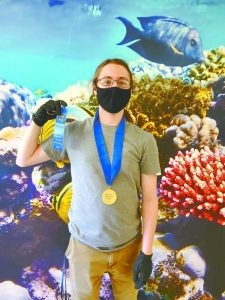 By Tony Hooker
In many ways, Andrew McQueen is a normal high school kid. Working a part time job after school and looking for a means of transportation to buy.

When it comes to programming and computer science, however, Andrew is anything but normal, as he recently won his second straight title at Eastern Illinois University’s Academic Challenge. The challenge, known as the WYSE competition for its first forty years of existence, pits high school students against one another in various academic disciplines, including Biology, Chemistry, Computer Science, Engineering graphics, English, Math and Physics.  Making the feat even more remarkable is the fact that Villa Grove High School has no courses in computer science, so Andrew is almost completely self-taught. I recently sat down with the junior to discuss the competition, his love for programming, and so much more.

When did you begin to develop an interest in computers?

Probably when I started playing video games. When I was really young, around five, I started getting into video games and I always wanted to know how they work. A good example would be the game Minecraft. It’s a simple voxel-based game but it has a lot of intricate behaviors. I really like the game, and some of the mechanics of it exposed me to low level circuitry and so I went off and started learning different programming languages. If I want to learn how to do something, just learn how to do it, the particular programming language and I just go out and do it.

That’s really exceptional! Is computer science the discipline you’re going to focus on in college?

I’m probably going to focus on computer science or computer power, because I really enjoy doing that. I like solving problems. One area in particular that I’m interested in is computational mathematics, where you use programming to solve math problems. I like programming and I like math, so I think that’s really cool. A lot of my projects have focused on that recently. I like making short programs to do my math homework. It makes it easier because I know how to do it but I don’t feel like sitting there doing fifty problems that I already know how to do.

Does it show your work?

I could make it do it if I had to, but I don’t have to right now.

Is math your favorite class in school?

Oh yes, definitely. I like solving problems and stuff like that. Finding patterns and ways to represent data with math is fun, too.

What do you do when you’re not programming?

Do you like the fine arts? Art, painting, music, etc.

I like listening to music and looking at art, but I’ve never been exceptional at it. I don’t really get the concepts of art or music, but I can enjoy content.

Can you tell me about the competition that you recently competed in?

It was formally called the WYSE competition. It’s held by EIU now, it was formerly hosted by UIUC.

There are three divisions, regional, sectional and state, and you are given a choice of two subjects to test in and depending upon how good you score, you can move on to sectionals or state, and that’s what I’ve done the last few years.

Do you test in math and computer science?

I focus pretty heavily on the computer science.

And you’ve won all the way through?

Last year, I finished second to my friend at regionals. I gave him a prep course to get him ready for regionals, and I must have given him too much good information at regionals, because he beat me! I beat him at sectionals, though.

That’s cool that you were willing to share your knowledge.  Does winning the academic challenge get you on the radar of colleges?

I think it would definitely help my case. In Villa Grove, we don’t really have computer science teaching, so it shows that I can take the time to learn it and still be exceptional at it.

Are you totally focused on programming, or are you into the hardware as well?

I don’t know too much about hardware, but I do find some of it fun. I’ve messed around and built bit adders, which are basic low-level calculators for binary addition. I really like focusing on the programming, designing software and tools to make things easier.

Is there a connection between the computational math that you like and artificial intelligence?

I’ve never really dabbled in AI, but I think the concepts are pretty cool.  A computer having reinforcement learning or learning to do something like that. Something that I’ve worked with in AI are boids. You can use boid for bird flock simulations. A set of Birds move at a certain velocity and they move around, and you want to make sure they don’t bump into each other but still represent certain bird behavior like coming together into flocks.

And you can create a program for that?

Yes, you can write a certain set of rules.

What was the first computer language that you learned?

How many are you fluent in now?

I’m fluent in Lua, Java, and Ruby and I’m learning Go Lang, Dlang and C and C++. There are a few that I used to use that I haven’t learned in so long that I probably couldn’t remember the concepts from them. Things like Visual basic and stuff like that. I was probably ten when I was using that stuff and I’ve moved on. I’m using programming languages that have more rich features. Languages such as Go have type safety, so variables can have different types of values such as a string, a number or a glean, which is like a true/false and so sometimes you might have a logic error in your code. Javascript doesn’t have a typed language so you don’t have to define the variable.

You’re a junior in high school? Are you going to take college classes your senior year?

Parkland offers classes that will take three hours out of my day and I’ve already taken all the math and science classes at Villa Grove.

Where do you see yourself in five years?

Is there anything I’ve missed? Anything you want to add? Anyone you want to give a shout out to?

Definitely all my teachers because they always give me support and they’re always interested in programming projects and they always find them interesting to see. Recently I made a sand falling project using concepts from cellular automata. In cellular automata, you have a group of cells, and each individual cell’s state is based on the cells around it. So, in my sand falling simulation, if I have a cell full of sand, I can check if the cell below it has sand, and if it doesn’t the cell can move down. I can also move them to adjacent cells. Ms. Werts and Mr. Murawski are always interested in seeing my projects and have always supported my programming.