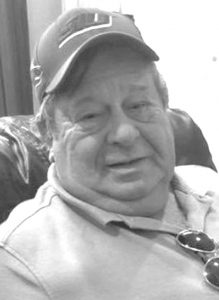 He is survived by his wife, Sharon Farris; two children, Joel (Hoa) Farris of Champaign and Amanda (Josh) Drake of Camargo; three grandchildren, Hayden, Harper, and Lilly; one brother, Jon (Sherry) Farris of Cissna Park; and one niece, Paige Farris.

He was preceded in death by his parents and a nephew Ryan Farris.

Mike grew up on a farm just outside of Hume where he worked with his brother and father. He served in the Army in Vietnam and was awarded a Bronze Star. Mike was a farmer for most of his life and finally retired in 2015. Although he never quit worrying about the weather as farmers do.  He also worked for IDOT for many years. Being outdoors was his favorite place to be. Hunting and fishing were some of his favorite hobbies.  He was an active member of the Hume American Legion and was a FreeMason.  He loved his wife Sharon very much of almost 53 years. They met in the lunch line in 6th grade and have been together ever since. His children Joel and Amanda brought him so much joy as did his grandchildren Hayden, Harper and Lilly. He was a wonderful husband, father, brother, grandfather and uncle and will be greatly missed.

In lieu of flowers, memorial donations may be made to the Hume American Legion or the Hume Auxiliary.