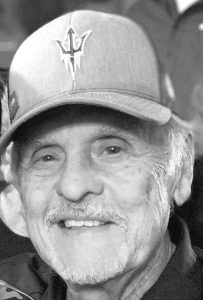 The beloved and treasured patriarch, William (Bill) Eugene Gabbard, 79, of Villa Grove, IL, born on March 12, 1942, was stolen to heaven on April 20, 2021. Seventy-nine years wasn’t quite enough according to him as there are items that remain on his never-ending To Do list.

His heavenly family welcomed him with the biggest hugs, a cold cocktail, a joke or two, and a spot at the euchre table. Included in that heavenly family are the love of his life, Joyce Lynette, deeply missed sons Trevin Eugene and William Tron, mother Emogene, father Ben, stepmother Coralie “Cork”, and brothers Dick and Tom.

A self-made businessman and entrepreneur, he built the successful food distribution business MSI Foods in Danville, IL. He also brokered many business deals throughout his life that afforded him the ability to give freely with all his heart to those around him.

Bill was an avid fisherman, hunter, golfer, singer, dancer, storyteller, joke teller, beer drinker, and area jitterbug champion. He loved his family, working in the yard, tending his plants, thinking about work, going to work, doing work, and thinking up more work even in his last days.

Per his wishes, Bill will be accorded cremation rites. A graveside service will be held at 12:00 p.m. on Saturday, May 1, 2021 at the Villa Grove Cemetery with Pastor Jerry Conner officiating. An open house visitation will be held after the service at TriCity Country Club in Villa Grove until 4 p.m. Joines Funeral Home (Villa Grove) is assisting the family with arrangements.

In lieu of flowers, Bill would appreciate any support and donations for Villa Grove Schools and Athletics.