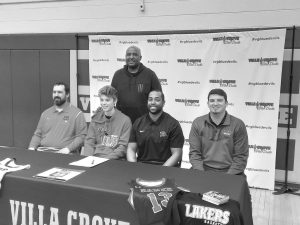 By Tony Hooker
For almost as long as he’s been on this earth, Jake Eversole has been around basketball. Jake, the son of Jason Eversole and Shauna Frost of Villa Grove, who recently signed a full ride scholarship offer to continue his playing career at Lake Land College in Mattoon, recently sat down and discussed his love for the game, his future plans, and a lot more.

I think my first memory ever was playing in the ball play pit, with the little hoop on it. I don’t remember how old I was, probably two or three, but I remember throwing them into the hoop.

When did you begin to take basketball seriously? When did you go from throwing a plastic ball into a hoop to trying to work on your game and get better?

As a kid, I kind of liked the game and I was pretty good at it, but I would say sometime around my freshman or sophomore year was when I became serious about it, trying to get to the next level.

When did it occur to you that you might have a chance? (to play at the next level)

Probably at the start of my junior year. At the end of my sophomore year, I still wasn’t the main guy on the team, but starting with my junior year, I began to realize that I could play with these kids.

Did you play travel ball?

I didn’t play AAU or anything like that. I only played high school ball. I was going to play in the summer but Covid wiped all of that out.

It’s not often that someone from a town of this size gets to play college ball. How did that all come about?

It’s been a struggle, honestly! <laughs> Especially with COVID. It started with emails that I put together and sent to coaches, with highlights and information about me. I didn’t get very many emails back, but after a while I got my name out there a little bit more and it eventually led to me signing with Lake Land.

What do you like to do when you’re away from the court?

Away from the court, I like to hang out with my friends and family, but mainly I’m in the gym. <smiles>

Oh, yeah! I love football. I’ve played baseball my whole life. I was going to play football this year, but put basketball over it. I planned on playing the October season, but when it (the season) got pushed back after basketball I decided not to.

What are you going to study?

Does Lake Land have a pretty strong Business program?

What do you know about the coaching staff at Lake Land?

I know that coach (Julian) Larry is a new coach and the players all love him. He told me he’s serious about winning and he’ll do whatever it takes to win.

He looks like he can still ball a little bit, too?

Yeah, he played in his previous days, I think, and he looks like he can still play.

How did your association with Coach Verdell (Jones, Sr.) come about?

I’ve been training with Coach V since I was about in fourth  grade. I practiced with an AAU team and got connected with him and started training with him. I’m still training with him. He knows Coach Larry, and gave him a call and told him that he knew me, and that they (Lake Land Coaches) should come up and take a look. I’m thankful for Coach V. I wouldn’t be here without him.

For his part, Coach Jones thinks that Jake has all the tools, including a work ethic, that will help him succeed.

<Coach Verdell Jones, Sr.> I’ve been working with Jake since he was in fourth or fifth grade, it’s been a blessing to work with him, and we’ve become family. He loves to get better, and that’s one thing I challenge every young man who comes into my gym with. If you’re not here to get better, this is the wrong place to be!

He’s not afraid of hard work?

<Coach Jones> Hey, listen. I’ve always believed that your ability to grow is directly proportional to your willingness to get out of your comfort zone. If that’s the case, then it’s my responsibility to get you out of that zone. He’s accepted the challenge. We’ve worked on those weaknesses. I believe in establishing those weaknesses and then building toward them.

Jake, you recently went down and scrimmaged with the Lakers?

On Monday I did, yes.

What was that experience like? A little different than playing Arcola on a Tuesday night, right?

Oh, man! It was a lot different. Those kids are athletes. They’re ten times bigger, stronger, faster. I think I did alright, though. Towards the end I transitioned to getting more comfortable to their speed and style of play.

Coach Larry thought so too, right?

I think so, yes. I think I impressed him with my passing.

Coach Larry concurred with that assessment. “When he came to play with us, I was really impressed with his passing and how he adapted his game with our players. He hasn’t really seen players that fast and he adapted well. He finished a lot of shots around the basket. Throughout his senior we were watching him and we came away very impressed,” Larry stated.

Are they projecting you at the two or the point or more of a combo?

I think more of a combo, but they had me bringing me the ball up a little bit. I expect to play a little bit of point.

Did they double (team) you? Trying to see what you had?

They were bringing it at me, oh yeah. They were pushing me, and I was going 100 percent the whole time, which was good.

I always heard the biggest difference between college and high school was that in high school every team had an Alpha, but in college, every player on the team is an Alpha, is that right?

They’re all freak athletes. I’ve never played anyone like them before. It’s only going to push me.

Do you feel good about your chances of succeeding there?

I feel good. I think that practicing with that team all the time is only going to make me better.

What’s your strength as a player?

I can see the floor really well, I always have. That’s just something that’s come naturally for me. I can drive and score, but I think passing is my strong suit.

When queried, Coach Jones also pointed out his strong basketball IQ and his ability to shoot, as being strengths as well.

Jake feels that his defense is his area of weakness, and both coaches were quick to point out that he needs to get stronger to have success at the next level.

<Coach Jones> He’s going to have to get stronger to play at the next level, that’s what Coach Larry and I have been discussing, so we’re going to set up some stuff for him this summer, before he leaves to go down there. Of course, they have a great weight program down there.”

I’m sure they’ve got a great strength program down there?

One of the players said to be sure to take a before picture and an after shot to see the difference!

What’s going to be your biggest challenge as far as acclimating to college, in general?

Do you have a girlfriend?

I have a girlfriend. (Reagan Cheely) She plays softball for Parkland. We both have the recruiting experience. We’ve been together over a year now. I remember seeing you come over and doing this interview at her house last year. I got to see her sign, and I wasn’t expecting it to be me this year, but here we are, and it’s very exciting.

How high do you think you can go?

His coaches, however, see unlimited potential.

<Coach Larry> He can most definitely play at a four-year school. He already has the offensive game. It’s just getting stronger and working on his defense, along with developing the tenacity and becoming a gym rat to keep getting better.

<Coach Jones> The sky’s the limit. He’ll be ready for it because he’ll gain the size and strength as well as an understanding of the dynamics of college basketball, absolutely. He’ll adjust, but the key is he has to be journey oriented, and not destination. If he’s journey oriented, he’ll get through it, but if he’s destination oriented, there will be days when that light at the end of the tunnel will be Amtrak! <laughs>

It’s our job to keep him focused.

Jake, is there anything you would like to add?

I just want to thank my family and all my coaches. I’ve got a lot of supporters. You saw all the people at the signing. All of my family loves coming to this stuff. I just want to say thank you to all of them.

Bench big in bounce back win for Warriors