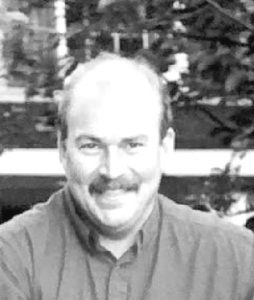 John Cunningham, age 67, passed away at home in Alpine Twp.  on Wednesday, April 21, 2021 surrounded by his family, after a long battle with Multiple Myeloma. He was preceded in death by his parents, Dr. John N. and Betty Jane Cunningham. He is survived by his loving wife of 26 years, Jacqueline (Regan) Cunningham; sons, Jack Cunningham, Samuel Cunningham, Luke Cunningham; siblings Jo Ellen (Joe) Monahan, Dr. William (Norine) Cunningham, Michael (Deanna) Cunningham, Susan (Phil) Slagle, Theresa (Wendell) Meyer, Jeff (Cathy) Cunningham, Dr. Dan (Soraida) Cunningham; 20 nieces and nephews; and 17 great-nieces and nephews. John grew up in Tuscola, Illinois where he fell in love with hunting, fishing, and the outdoors. After college, John began working in the outdoor industry as a sales representative where he travelled the Midwest. He lived in Illinois, Indiana, Minnesota, and Michigan. Eventually, John settled into what would be a 30-year career with JH Nicholson, Inc. in Rockford, MI, where he was a sales representative for Browning, Winchester, and many other hunting and fishing companies. John earned countless awards over the course of his career. In 1995 John and Jacqueline were married and they found their dream home in Alpine Township, just outside of Grand Rapids. John turned his property into a gentleman’s farm, where he would garden and raise goats, chickens, donkeys, a horse, and many dogs in between. His property sported ample land for John and his kids to hunt in the fall, sled and snowmobile in the winter, maple syrup and look for morel mushrooms in the spring and have pool parties and campfires in the summer. He took great pride in the fact that his property, eventually coined “Camp Cunningham,” became a vacation get-away for all of his family and friends. John considered his greatest accomplishment to be his three sons. He loved attending their football games, baseball tournaments, and musical events. John will be remembered by all that knew him for his humor, his strong work ethic, and his selflessness. John was a member at St. Joseph’s Catholic Church in Conklin. The family will receive friends at family at Beuschel Funeral Home, 5018 Alpine Avenue, Comstock Park, on Thursday, April 29, 2021 from 6:00 p.m. to 9:00 p.m. The Mass of Christian Burial will be offered on Friday, April 30, 2021 at 11:00 a.m., at St. Joseph Catholic Church, 18784 8th Avenue, Conklin, with visitation at 10:30 a.m., with co-celebrants Rev. Father Tim Monahan, Father Gabriel, and Rev. Father Andrew Ayers. Interment will be in St. Joseph Catholic Cemetery.