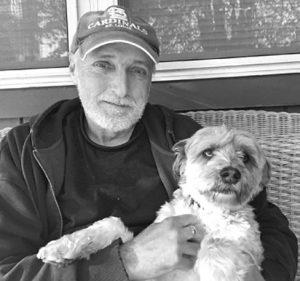 Mr. Daugherty was born Nov. 12, 1956, in Marion, Ohio, a son of Lee and Marguerite (Maggie) Daugherty. He was preceded in death by his parents and a brother, Jimmy.

He had several cousins scattered throughout the U.S., but he was very close to his surviving cousins Barbara Coles of Portland, OR, Lynn (Carla) Baker of Fredericksburg, VA, and Linda Atkinson of Stevensville, MD.  Also a part of Kevin’s family were his god-daughter Robin Mackey, his grand-god-daughter Rylee Mackey, and Robin’s father Michael Mackey, all of whom reside in Peoria, IL.

Mr. Daugherty graduated from Tuscola Community High School in 1975. He went on to attend Eastern Illinois University where he graduated in 1986 with a bachelor’s degree in philosophy.

He married Teri McCarthy on March 21, 1986, at the Wayside Chapel in Palos Hills, Ill. The couple later divorced. She resides in Urbana.

An amateur musician who was passionate about music, Mr. Daugherty worked on occasion in the 1980s as a sound technician at Ted’s Warehouse in Charleston, as well as for local bands Slink Rand and Clockwork Orange. He also enjoyed reading, especially the Beat-era poets, and a good intellectual conversation.

After moving to Urbana in 1988, Mr. Daugherty worked successfully for several years in rental property management and maintenance. He later started his own landscape and lawn care company.

Owning his own landscape company allowed Mr. Daugherty to spend his days outdoors. He loved to be surrounded by nature and wildlife. His other great passion was for animals, especially dogs.

“His love of animals was a defining characteristic. He loved all animals, but especially dogs were drawn to him. They recognized his good heart and the love he had for them,” said his ex-wife, Teri.

Mr. Daugherty could often be seen walking his beloved dog, Duke, around the streets of Tuscola. Duke will stay in Tuscola, eventually to be adopted by a local family.

Funeral arrangements are being handled by Hilligoss Shrader Funeral Home in Tuscola. Mr. Daugherty will be cremated and a memorial service will be set at a later date.