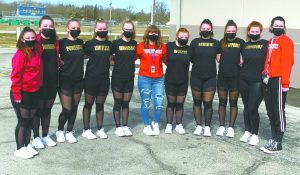 How long have you been coaching the Devilettes?

Six years total, between both programs.

Can you tell me a little bit about this past season? It was a bit different, right?

Yeah! I can probably tell you a lot! <laughs> It was difficult to keep up between going from virtual to in person. I think the biggest challenge that we faced as a team would be finding new ways for the team to be interactive with each other. Keeping them close and bonded whether it was through practice or over zoom was a challenge, but I think it was good for us to have to do that because I think it made us a lot closer. It definitely built a lot of resilience when we were able to, in a sense, come back permanently. I couldn’t have asked for a better group of girls this year. I feel that no matter what was thrown at them, they were asking me ‘Ok, what do we need to do next?’ no matter what it was. I’m very grateful for the opportunity to not only coach them, but to be around such positive young mindsets. I would say competing virtually was kind of different. It was kind of nice in that we had the advantage of always using our home floor, and I would always tell them that. It was different, but I think the girls honestly enjoyed certain aspects of it. We would have viewing parties every Saturday that we were together. We really enjoyed bonding closely with our junior high team this year. I know the girls really enjoyed getting closer with them and being like their big sisters.

Did you have an opportunity to compete live at all this year?

All of the competitions were virtual? Did you live stream it or were you able to record it and send in your best versions?

Every week, we had three or four days between each competition, so every Wednesday, we would record it a couple of times, pick our best one and send it in. Someone would compile all the videos together, and they would make a quote unquote competition out of it. We would view it on that Saturday, and it was pretty cool that so many teams could come together on such short notice.

How did your team perform this year? Did they meet your expectations?

I think our biggest expectation as a team this year was going in with a positive mindset, knowing that anything could happen, but also being extremely proud of what we put out, knowing the obstacles we faced. I am really trying to teach the girls that placement isn’t everything, but it is something that you obviously are proud of at the end of the day. It’s like a cherry on top of the cake. Again, I couldn’t ask for a better group of girls, who put their heads down and worked hard for every single thing that they put their hearts and souls into. We did end up placing fourth in IDTA state, which is not exactly where we wanted to be this year, but with the circumstances this year, they felt extremely proud of what they put out, no matter how many times they watched it on YouTube! <laughs>

Are you losing girls from your team this year?

We are unfortunately losing a couple of seniors this year.

Who are you losing?

Moving forward, are you ready for another year with the reigns?

Yes, I’m looking forward to going all in next year, even though we’re still not sure what that’s going to look like, but of course I’ve already started planning for next season, a few months ago! <laughs>

What’s your gut feeling? Do you think that you’ll come back and we’ll be back in person next year?

There has definitely been some discussion for the IDTA organization and we have very high hopes that we’ll be live next year, so I’ve already told the girls that they should try and stay positive for next year and we’re really hoping we’ll be able to do that.

No, other than it’s been a whirlwind of a year and I’m ending the year with a very grateful heart and I’m overall extremely proud of the many obstacles that the girls have overcome. Knowing that dance has been their safe place, so that makes me very proud as a coach. I’d like to thank Noreen (Acton) She’s on top of the game as far as scheduling goes, and of keeping on top of life events such as COVID. All of our parents. You know how dance parents are. They’re ready to jump in at every single second that they get, and they’re also there with love and support for the dancers. I’d also like to thank my fellow coaches in IDTA. I feel like we’ve really formed a lot of relationships through the last year because we’ve all been going through this.