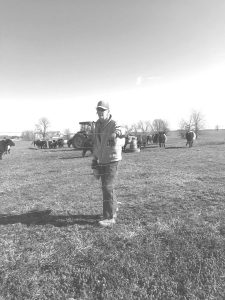 Photo: Tony Hooker
Tony Burris tends to his herds of cattle at his farm in Villa Grove.

By Tony Hooker
Tony Burris wasn’t really planning on having a large herd of cattle, including Herefords and Belted Galloways.

He just thought the Belties, known colloquially as “Oreo Cows’’, would be a nice addition to the family freezer, based on research he had done that showed they were leaner than other breeds. From that bit of internet research, his herd now numbers nearly 40. I recently caught up with Tony as he tended to his bovine charges and we talked about the how’s, whys and what the heck was I thinking of his operation.

How long have you had the Belted Galloways?

I think this is my seventh year.

What drew you to this particular breed?

I guess the internet. I got on the internet and it’s really a cliquish thing. If you want to, you can sell them on the internet, and If you get into showing them, they sell good, but we don’t do that. I just got them and started butchering them. Everyone likes them. I don’t think I’ve had anyone who wasn’t a repeat customer. I just kind of stayed with them, and I just decided to get some Herefords. I kind of like them because they’re calmer.  I don’t think I handle these (the Galloways) enough.

The Galloways are a little feistier?

They seem to be. They used to be really calm. I don’t know if people bother them or what. They’re fun to watch. They’re easy keepers.

How long have you been in agriculture?

Where did you come from?

From Kentucky. Dad always had cows and I liked working with them.

Have you had cattle here since you started in 69?

No, I just got these seven or eight years ago.

This is your first herd then. And of course, there’s grain farming. Are you still actively involved in that?

The boy says I’m not! <laughs> Rhett’s pretty much taken over all of that. He does all of the marketing and buying fertilizer. Everything went to the internet and I’m not an internet person. I don’t really like email and all of that junk. <smiles>

Does he still let you drive the combine or are you relegated to Auger Wagon duties? <smiles>

What’s the difference between the Galloways and other breeds of cattle?

Size, mostly. Herefords get bigger. The Angus people have kind of taken over the marketing side, but if you take the hide off of them you can’t tell any difference! <smiles> These red ones (Herefords) I got because you can buy them a lot cheaper than you can the Angus. I got these off some people who had a herd.

How do the Galloways fit in the pricing structure?

They’re at the bottom. As far as selling on the market, at a sale barn, the Galloways won’t bring as much. Buyers want something with big, long, lanky legs. I guess it’s more about looks than anything. As you can tell, they’re a little dumpy kind of cow. They’re a lot smaller.

Do you have any idea why they’ve developed the Oreo coloration?

I have no idea. They’re a breed that was developed in an extremely cold climate. If you’ve ever been by here when there’s snow on the ground, these cows love it. They love cold weather. Hot weather’s a little hard on them. Supposedly, they’ve got a layer of wool and then the hair on their hide. That’s why they don’t put on any fat.

Is there anyone else around here that has the Belted Galloways?

You’d kind of be surprised. There’s a herd in Effingham, a few around Champaign.

Are you going to continue keeping cattle?

I don’t know. I’m getting old and it’s a lot of work. Here I am today, and I was grinding feed yesterday, so it’s really just about every day.

Sixty hours a week on a hobby, right?

Are the boys interested in taking over the operation?

Not really. They know it’s too much work. My son Jason is a barber, and he said ‘Dad, there’s a lot of climate-controlled offices and places you can work!’ <laughs>

Is there anything I missed?

I’m not really an interview kind of person. I do enjoy your Ag edition every year.