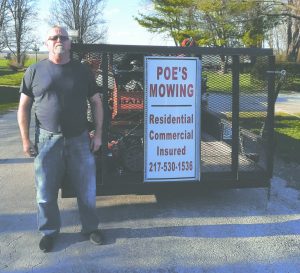 By Tony Hooker
Tom Poe wasn’t the biggest mowing fan when he was younger.

It’s a good thing his attitudes changed as he got older, or else his company, Poe’s Mowing, would never have happened. For a growing list of satisfied customers, that would be too bad.  Tom recently sat down to answer a few questions about how all of this came to be, and what the future might look like for Poe’s.

What’s the name of your company?

How long have you been in business?

This is the third year.

What did you do before that?

I was a delivery person for a company called Aramark.  I delivered towels and uniforms and things like that.

How many years did you do that?

Did you retire from there or just change careers?

What was the big push?  Why did you decide to start your own business?

I had a couple of injuries at work, and seeing other people doing it gave me the idea.  I’ve always kind of wanted to work for myself.  I started out doing it on the side. Believe it or not, when I was twenty years old, I hated the thought of mowing grass.   Now, I absolutely love doing what I do. <smiles>  The best thing is, it’s not really the mowing, it’s the independence.  If I have to be somewhere at six o’clock, or if I have to quit at 10 or 11 and come back at 3 in the afternoon, I can do that.  There’s a feeling of satisfaction when you walk up to a property and it looks ragged and the grass is long and the shrubs need trimmed, and at the end of the day when you leave, it looks really good.  That’s a feeling of satisfaction.  The best satisfaction is you know that next week it’s going to look bad and you’ll get to do it again!  <laughs> It’s like a guaranteed income.

What services do you offer?

I do mowing, trimming, which is weed whacking, I blow everything off.  I do light landscaping, small mulch beds. Pretty much anything that has to do with lawn care.  I don’t fertilize because I don’t have to licenses you need.  I will apply roundup when there are too many weeds.

Let’s backtrack a bit.  Did you grow up in Villa Grove?

No, I grew up in a town called Neoga, Illinois.

When did you come to VG?

When you were growing up, did you ever think that you were going to own your own business?

No.  There are people who have careers.  They’re the people that really think and plan ahead.  And then there are people who just have a job.  I was one of those guys who just had a job.  I think of this as more of a career.  It’s just me and my wife, Traci.  She takes care of all the paperwork and helps me mow, when she’s feeling merciful! <both laugh>

Is there a succession?  Are any of your kids interested in the business?

No, but my youngest son is interested in landscaping so we’ve talked about him coming and expanding the landscaping end.  He knows how to do landscaping and he’s actually done hardscaping, which I don’t have a clue how to do. I don’t think the hardscaping will be super busy at first and then he could help me mow and we could grow the business, and then eventually, he would like to just do all the hardscaping.  If it works out that way.

Hardscaping is putting down stone?

After three years, is the business growing?

Business has just about doubled every year.  Of course, the first year there wasn’t much, so it was pretty easy to double. <smiles>  It just keeps growing.  I go from small accounts, $25 yards, to $250-dollar accounts.  You have some commercial accounts as well.  I kind of like commercial accounts because you can just get out and mow in space.  I mow from Champaign to Arcola, from there to Longview.

You really do ‘have truck, will travel?

Yes.  You don’t really want to go to Champaign to do one yard, but if you have eight or ten, you can make a day of it.

Looking at your equipment, there’s been a significant investment?

A significant investment, for sure.  My wife is nodding her head!

But, in order to do the job right, you have to have the equipment, right? You’re not going to go out there with an 18-inch craftsman push mower?

I couldn’t get done.  The big mower will run at 14 mph, but I can probably mow at 8 miles an hour, and that’s at 60 inches at a time.  The smaller mower will only run about six mph, but it’s for backyards.

What would you recommend if some youngster came to you and said ‘Mr. Poe, I’m thinking about starting my lawn care business?’

I’d say buy a push mower and start mowing grass.  The way society’s getting, people are so busy and they just don’t have the time or they don’t want to make the time to mow because it’s taking time away from what they do for a living.

I am hoping to double again and increase significantly this year.  I’d like to do this until I’m in my seventies, to tell you the truth.  I’ve added equipment so I do more riding and less walking on everything.

Exactly!  It’s a guaranteed income. You mow the grass and it looks good, but in a week, it’s not going to look so you have to come back again.  There is such a sense of pride when you’re done.