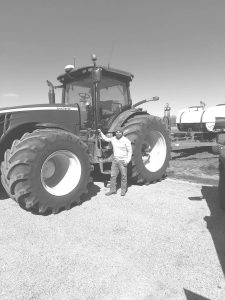 By Tony Hooker
In today’s hypercompetitive farming world, you have to innovate to succeed.

For Justin Arthur, a fifth-generation farmer who still farms land that his great-great Grandfather George once tilled, and his team at Hindsboro’s Arthur Farms, innovation is an everyday occurrence. I recently sat down with Justin as he and his crew began to prepare for spring planting to discuss his farming career and a whole lot more.

You graduated from Tri-County High School?

No, that’s incorrect. I graduated from Mattoon High School.

Yes, and we drift down into Coles county a little bit. My grandfather’s from the Mattoon area, so we still go down and farm the family ground down there.

How long have you been in the business?

I graduated from the U of I in 03, so we’re touching on 20 years almost, but I was involved for probably ten years before that.

In those twenty years, how has the industry changed?

I would say it’s become higher tech/high speed. Probably more competitive. Auto steer has changed everything. We can run all night long without any of the fatigue we faced from running a couple of hours after dark twenty years ago. If you planted 160 acres 20 years ago, it was a big day. Now, with some of the equipment we run it’s almost a poor day.

Did you ever consider doing anything else?

When I was a kid, in junior high, I considered becoming an engineer. I had four uncles who were engineers and two of them were in the ag industry so I kind of had that in the back of my mind, but as I got older, the opportunity seemed to be here for me.

What’s your favorite part of farming?

I assume it’s the harvest.

The fruits of your labors, and all of that?

Is your family involved in the operation?

Jena’s (his wife) is our secretary. The kids are seven and nine, so they’re just getting old enough to appreciate it a little bit.

They like to get on a tractor with dad and scratch a little dirt?

Have you taken over the operation completely from your grandfather?

On the farming side, pretty much. He still has a couple of fields that he farms. For the most part, he’s retired from farming, and then he and I are partners in the shop.

The name Arthur’s Repair Shop was originated by my grandpa, Wayne, and his father, Zethie. They would have started it over 65 years ago at our Mattoon farm. My grandpa moved to Springfield and then moved over here in about a five-year period, and as his father’s health declined, they decided to move the shop here.

You also sell farm equipment. Did that spring from Arthur’s repair?

Correct. It was probably only a repair shop for about a year and then they started the retail side, selling new equipment. The name really isn’t relevant to anything we do. We service what we sell, but we’re not really a welding shop or anything like that.

What brands do you sell?

Doubling back a little bit, you were talking about how everything is modernized and bigger, but you’ve also embraced some ‘old school’ techniques that I’ve noticed, with the cover crops and the manure spreading. How did you come to that decision?

My grandfather had livestock during his early career, and the fields that always yielded the best had manure spread on them. We looked at that as an old school fertilizer that could increase yield. We tried our hand at organic farming, but that was just too time and labor intensive to work with what we had going on. That kind of went hand in hand with the chicken litter, and we just carried that through the conventional side of farming.

Do you see better yields?

I think the soil health is better. I don’t know if that always translates to better yields, but I think a lot of times the ground drains better and it just seems to be a little more alive.

What about the cover crops?

It’s kind of the same difference with soil health. I think there’s some benefits there to the soil health. I’m not sure it always increases yields, but I think the ground’s in better condition.

So, you’re walking the walk when it comes to being stewards of your land?

We try to be. We don’t implement it on all of our acres because it’s just so hard to be timely enough to do that. I’d sure like to do it, though.

Where did you get your inspiration for using cover crops? Is there an organization that promotes it?

The NRES office at Tuscola has some government programs to incentivize that, and also the U of I extension promotes it. There are also companies that promote it. Proharvest is who we got started with on cover crop. We actually got started during a drought year in 2012. We knew we were going to harvest super early because the crops just dried up and so that’s a perfect time to plant cover crops when you can get good growth in the fall. We kind of went whole hog into it that year, and we’ve been doing it ever since.

What species is it?

We plant a lot of wheat for cover crop, just because it’s simple and easy to terminate. Rye grass would probably be the most common, and then there’s a plant called tillage radish also. We’ve planted all three of them. <smiles>

Can you harvest the cover crops that you plant?

You could. We have standard wheat fields also that we’ll harvest. The cover crop and the wheat are normally a separate deal.

The cover crop’s main purpose is just to hold topsoil and to be churned back into the earth?

Well, you’ve got a live root in there all year long, also I feel like the soil, along with the microbes in it, benefit all year by keeping a live root out there rather than one that’s dead.

What’s the worst part of your career?

I don’t know. Sometimes it’s labor. It aggravates you when you have a shortage of labor, but I think that’s in any industry so it’s probably not unique. Possibly the long hours. Spring and fall we run pretty hard and that gets monotonous after a while.

How many guys do you have working for you right now?

We have five full time guys and some part time guys, too.

Do you think that there will be an opportunity for your children, twenty years from now?

The opportunity will be there for them. We’ve got enough diversity in our operation now that either my daughter of my son will be able to step in. Where Ag’s transitioned from my grandfather’s era to mine is he used to say ‘ The guy that works the hardest makes the most, and it’s nothing like that now. Obviously hard work is still a part of it, but it’s really about maximizing your efficiency.

What would you tell someone who came up and said Mr. Arthur, I want to be a farmer?

It’s possible. Anything’s possible, but the capital requirements are the toughest part in getting started in farming. You almost have to have someone who helps you get going, and then the land requirements, which are part of the capital. It takes decades, or even a lifetime to establish your rapport with the neighbors and pick up farm land. It’s hard to just jump in and say ‘Here we are! Let’s take off with it.”

Do you own your land or cash rent it?

We do both. We’re pretty typical of the average farming operation.