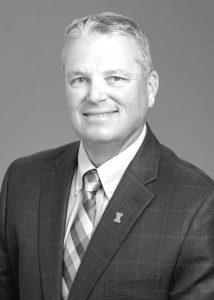 Greg’s father died when Greg was just 9, and after his mother remarried Alfred Hettinger (now deceased), the family moved to a farm in Villa Grove. Greg’s sisters, Denise Rieser (Gil) of Rivervale, N.J., and Michelle Osborne of Villa Grove, describe their brother as a happy-go-lucky child who had a little ornery streak. In high school, he played football and was a drummer in the school band. He enjoyed helping his stepfather with the farming operation and even considered becoming a farmer himself, but after his first year of college, he decided to transfer from the University of Illinois to Saint Louis University’s Parks College to become an avionics engineer.

After graduating and earning his private pilot’s license, he got a job at Sikorsky Helicopter in their Bridgeport, Conn., office. His sisters remember him telling them that he had met a cute girl at work and that he planned to ask her out on a date. Patricia “Tish” Francis said yes. Three months, one Grateful Dead concert and one evening of learning the proper way to eat Buffalo wings later, she said yes to a bigger question, and Greg and Tish were married July 28, 1989, in Shelton, Conn., near Tish’s hometown. Their first son, Joseph, was born July 23, 1991.

A few years later, Greg and Tish were called to the ministry and joined The Way International. After completing their ministry training, they worked in Michigan sharing the word of God for several years, where their second son, James “Jake,” was born May 30, 2000. During their time in the ministry, Greg also taught himself computer programming and accepted a position as a part-time software engineer for the Sabre corporation. Greg and Tish’s third son, Matthew, was born April 4, 2003. With the family complete, they decided to move closer to Greg’s family in Villa Grove.

The University of Illinois offered him a job as a senior project manager in the Decision Support unit, and he began his UI career in October 2003. He was promoted six times, eventually serving as the deputy chief information officer (CIO) in Technology Services and since June 2019 as interim CIO. He nurtured his entire staff, taking time to stop randomly into their offices and talk about their hobbies, families and, of course, Illini sports. Provost Andreas Cangellaris said, “It was the quiet and constant kindness Greg showed to every person in every circumstance on every occasion that earned him such enormous respect and trust.”

Greg’s colleagues say Greg had a thoughtful approach to problem solving — always listening quietly as others debated and tried solution after solution that did not hold up under scrutiny. Then, he would ask a few insightful questions that opened an unexplored path and helped everyone see a better approach to their shared goal. UI Chancellor Robert Jones said of him, “Greg was not the kind of person who needed to hear himself talk, but when he spoke, you listened, because you knew he was going to say something quite profound.”

One of Greg’s favorite ways to relax was golfing — whether traveling with Tish and other couples or just playing at the local nine-hole course in Villa Grove. Greg played for fun but was sometimes competitive and always found the sport healing. He scored a hole-in-one on two separate occasions, and he and his buddies enjoyed making small wagers when they golfed together. A few of them may or may not still be unsettled.

Greg was at the helm of Tech Services in March 2020 when the COVID-19 pandemic forced the university to move all classes online during the seven-day spring break. He and his team worked around the clock to meet that challenge. Throughout the pandemic, he served on the universitywide COVID-19 Steering Committee and led the Tech Services team as they built the complex systems and applications to support the university’s novel saliva testing program and entire SHIELD ecosystem.

Despite the tremendous responsibility and workload, Greg approached his job with confidence, compassion and a laser focus on doing everything possible to help students, faculty, staff and the greater community stay safe during the pandemic. He was accessible, friendly and unflappable, always staying calm under pressure and making the demands of his leadership role look easy.

Greg continued to work even after contracting COVID-19, attending meetings remotely and offering his staff and other colleagues wisdom, moral support or just a funny comment to make them laugh. This may have been the hardest year in memory for nearly every person on the planet. But for Greg, this was the best and most rewarding year of his life. He took endless joy in helping keep his community safe in the face of a global pandemic and in the simple and unwavering faith that he was exactly where God needed him.

Greg will be remembered as a leader who changed the university for the better, as a son and brother who was the darling of his family, as a husband who loved his wife with his whole heart and as a father who loved each of his sons completely and uniquely, never comparing them to each other and never pushing them to be anything more than who God created them to be.

To prevent COVID-19, the celebration of Greg’s impactful life will happen virtually. Colleagues, friends and family are invited to join the livestream and share their thoughts and memories. Details will be shared directly by the family later.

Memorial contributions may be made to Tri-City Country Club, 129 S. Henson Road, Villa Grove, or the University of Illinois at giving.illinois.edu. Choose “Illinois Commitment Scholarship Fund” and note “In honor of Greg Gulick” as the tribute information.