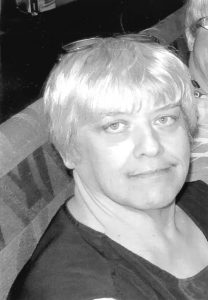 She was born January 10, 1957, the sixth child of Roberta (Keys) Chambers and Joseph Chambers.

Shelia is survived by a brother, Joe (Margaret) Chambers of Champaign, one sister, Beverly (Steve) Brownfield of Thomasboro and one brother-in-law, Robert White and several nieces and nephews. Among her special friends were Janice Berry, Jaima Adams, and Jim Williams, all of Villa Grove.

She was preceded in death by her parents, her infant brother Phillip, a brother Harold, and sister Joyce White.

Shelia enjoyed the simple things in life. She was known for her witty outspoken voice. She loved to be with family, especially her nieces and nephews, and also had a love for animals.

Before retiring, she worked more than twenty years at Carle Hospital.

No services are planned, per her request.