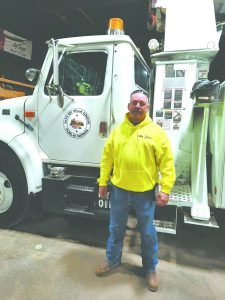 By Tony Hooker
Randy Lake knew what he was getting into when he recently chose to accept the position as Public Works Director after Scott Arbuckle left the position. Little did he know that his knowledge and dedication would be tested by the worst snowfall the city has seen in years, so soon after assuming the role. I recently caught up with the 1989 graduate of Villa Grove high school to see how he has adapted to being the one in charge.

How long have you worked for the city?

What were you doing before that?

My father and I ran a fabrication shop for about 20 years.

How did you come to leave there and begin working for the city?

He (Phil Lake, his father) was really wanting to retire and as long I stayed in the business, he was never going to. I spoke with Scott Arbuckle and he was looking for help. That’s how that transpired, I was talking to Scott and he was needing help with the sort of skills that I possessed. Like I say, he would have never retired had I not gotten out of the business. That was part of it. I’m also looking to finish out my retirement somewhere.

Which sort of skills helped you transition into your role with the city?

Mostly my mechanical skills. I have a lot of electrical in my background as well.

What’s the best part of working for the city of Villa Grove?

What’s been the biggest challenge?

The amount of behind the scenes work that really goes into it with a small crew. You’ve got four people who are trying to maintain your facilities, including your parks, your roads and your utilities. It can be pretty daunting! <laughs>

You transitioned into management right before the worst snowstorm we’ve seen in years, so you probably pulled an all-nighter or two, right?

We put in some long hours, for sure.

For me it wasn’t anything that wasn’t routine. There have been many other times that we had other things as far as sewer and water, where we’ve spent days at work to keep things running. The biggest challenge, really was the fact that we only have four people, and two of them had never plowed with a truck before. Luckily, we had a few small events before and I would bring them in in the middle of the night and kind of fast track them in, just in case we had a major event. It’s a good thing too, because we did have a major event, <smiles> and I thought they did an outstanding job. I have no complaints with those guys at all. We’d work 20 hours on, and I’d send them for a few hours to rest and then they’d be right back out there at it.

What’s been the biggest adjustment for you from being one of the guys to being the boss?

There really haven’t been any bumps. Being a laborer two, they would already kind of look to me. Scott was the boss, and if he wasn’t here, he pretty much left me in charge. It’s really been a pretty smooth transition in that way. There’s a lot of stuff that Scott took care of that I wasn’t privy to at the time, so that’s been a little bit of a learning curve.

The paperwork. The keeping in contact with all the suppliers, making sure that we have everything we need to keep moving. I can’t say enough about Scott. When he took over, he had a plan to make as many improvements as he possibly could. Scott and I worked closely together, and he taught me a lot.

So, you were ready when the opportunity came?

Not 100 percent as far as the paperwork, but he took me under his wing as far as “this is how it’s done. This is why it’s done. You can’t do this because if you do it for one person, you have to do it for everyone.”

Are you trying to pay that forward with your guys?

Absolutely. Right out of the gate, we’ve been cross training.

There’s no bifurcation between water & sewer and streets & alleys?

No. They’re required to do it all.

How involved will the city be in the McCoy project?

We’ll be involved, but that’s really pretty much left up to the contractors. I’m sure they’ll have some questions about main locations and that sort of thing, but it’s their project pretty much.

What’s the next year looking like for you and your guys?

We have the community building project coming up. I’m sure there will be a lot of things that we’re involved in out there, but again that will be up to the contractors for the most part. They’re talking about turning the fields, but I don’t know how quickly we’ll do that. As far as large projects, we’ll just keep updating the roads and cleaning up properties as they come up.

Has cleaning up properties been a priority for you?

Oh yes. Getting enough roll off containers to keep us going has slowed us down a bit. We have a lot of updates for the parks we would like to do. Coddington Park needs some attention. The fence is in pretty good shape, but the scoreboard needs replaced and the dugouts need painted and that sort of thing. We’ve already been doing quite a bit of work out at Henson, repairing the fences where they’ve come loose and that sort of thing.

Have you had any issues with COVID-19?

No, we haven’t. <bangs desk> Knock on wood! <smiles> We’re out in public quite a bit, but we still try to maintain our social distancing.

What issues are the toughest for you right now?

Our sewer system is aging rapidly. Right now, we’re down two of three pumps at the Adams street location. We just had techs in to fix one of the new pumps on pine, and at six thirty the next day, I got an alarm saying it had failed again. We’ll keep doing what we have to do to keep it running.

How about staffing? Are you set there? Any seasonal employees?

I’d like to hire one more person, even if it’s a full time-part time position. We’ve lost Jeff (Blackford) and Scott over the past year, so I’ve kind of been doing both jobs, continuing to do what I do while taking over the director’s job. I think that last year, due to staffing concerns brought on by the pandemic. We weren’t able to dedicate as much time as we would have liked to maintaining our parks. We’ve got a good group of guys and we take a lot of pride in taking care of our city properties.