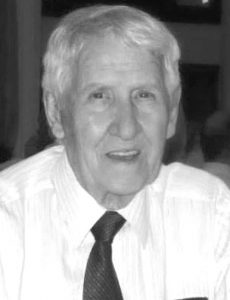 Harrold Ross Gallion, 95, of Newman died on March 4, 2021 at the Newman Rehabilitation and Health Care Center.

Harrold was a proud veteran of the U.S. Navy where he served on the USS Tillman as a corpsman during World War II. After serving his country, he attended Western Illinois University and worked at USI/Quantum Chemical Plant in Tuscola, Illinois as a chemical operator for 35 years.  He loved taking care of his home that he built with his father for his family. He enjoyed being outside working in his yard and puttering in his garage, well-known in his neighborhood for his constant whistling and singing.  Harrold was an avid fan of the Chicago Cubs, Chicago Bears and Illini sports. Most of all, he adored and devoted his life to caring for his wife, children, grandchildren and great-grandchildren and will be remembered by all of them for his sense of humor and playfulness, knowledge, and willingness to help at a moment’s notice.

Harrold was a member of the Newman First Christian Church and the Newman American Legion.

Private family services were held with military rites and officiated by Justin Smith, Pastor of the Newman Christian Church. Joines Funeral Home (Newman) is assisting the family with arrangements.

In lieu of flowers, memorial donations may be made to the Newman American Legion.