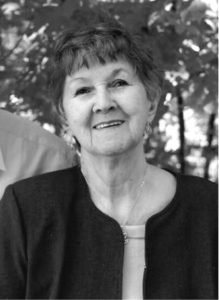 She is survived by four children, Debbie (Mike) Hamilton of Georgetown, IN, Cindy (Glen) Hawkins of Newman, Scott (Vicky) Drake of Newman, and Kelley Drake of Tuscola; eight grandchildren; thirteen great-grandchildren; one sister, Betty Hopkins; and a sister-in-law, Marge Trapani.

She was preceded in death by her parents, husband, three sisters, and one brother.

Mary graduated from Newman High School in 1951.  She was a housewife for the majority of her life, but she did work for a short time at the men’s clothing store in Newman.  Mary enjoyed being in her garden and canning what she could.  She also loved to knit and drive her golf cart around town, but most of all she loved to spend time with her grandkids and great-grandkids. She also spent many winters on vacation in Gulfport, MS with a group of friends.  She was a member of the Newman American Legion Auxiliary Post 201 and the Newman First Christian Church.

A funeral service was held at 11:00 a.m. on Saturday, February 27, 2021 at the Joines Funeral Home (Newman) with Pastor Justin Smith officiating.  A visitation was held an hour prior to the funeral service.  Burial followed at the Newman Cemetery.

In lieu of flowers, memorial donations may be made to the Newman First Christian Church.