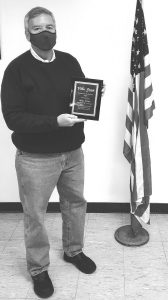 Photo: Tony Hooker
Mike Cline was recognized as City of Villa Grove Volunteer of the Year at the February 8 city council meeting.

After the pledge of allegiance was stated, Mayor Eversole Gunter called for a vote on the Consent agenda, which consisted of:
* Minutes of the last regular city council meeting, held 1/25/2021

* Approval of the cash balance report for the month ending January 31, 2021

The motion was made by Hooker and seconded by Johnson and passed unanimously, with Mayor Eversole Gunter giving the final vote.

Eversole Gunter then called for public comments, and local resident and business man Marvin Cler asked to address the council considering the pending WECS ordinance.  Mr. Cler’s main concern was the ability of the city to enforce contracts concerning the dismantling and cleanup of potential Wind Towers once they were decommissioned.  He believed that the ordinance as written didn’t have the power to hold them accountable, and felt that the city should make any company who wished to put towers in should have to put a down payment of $250,000, per unit to be held in escrow and used for site cleanup.

Alderman Hooker countered by stating that the windfarm attorney that the city had hired, Richard Porter of Hinshaw & Culbertson, LLP, had assured the council that there were requirements built into the ordinance to cover such contingencies, and Mayor Eversole Gunter concurred, citing the attorney’s credentials.  “Our city attorney recommended Mr. Porter,” Eversole Gunter stated.  He’s a nationally known expert in environmental law.”

Tom Cler then asked to address the council, and having been given the floor, stated that Villa Grove need only look east to Longview to see that the 1-1/2-mile state set limit wasn’t enough to prevent the construction of such WECS.  “Longview had apparently failed to get their paperwork in,” Cler stated.  “Many of the properties are owned by absentee landowners who really don’t care about the ones who still live in the area.”

After further discussion between the council and community members, Mayor Eversole Gunter ended by stating that the ordinance had been written by a specialized attorney to include protective measures.  “Please review it,” the mayor concluded.

Next, Mayor Eversole Gunter presented Mike Cline with the city’s Volunteer of the Year award, due to his selfless dedication to helping the council understand the ongoing issues and options concerning the water plant and wastewater treatment facilities.  The council then gave Mr. Cline a standing ovation upon his receipt of the award.

Administrator Athey then gave her report.  She stated that she had attended a recent economic development meeting, and that there were webinars upcoming on a variety of related topics.  She also noted that there are pending meetings with Keith Moran, the city’s TIF attorney.  She then noted that Barbra Wylie, SBLHS Peace Meal Program Director, had informed her that Blake Sanders had assumed meal duties and would interview for replacement of Robin Cowman, who has recently resigned.

Athey then said that the payroll audit had been completed, and that this process is used to help determine employee compensation rates each year.  W-2’s were completed on time and received by employees.  Athey noted that if they were missed, they can be accessed from the software.  She then noted that Ameren is in the process of removing services from the old water plant, with electrical service removed and natural gas to be removed in the next two weeks.  She then noted that sign ups were ongoing for summer rec programs, with the intention to have a complete slate in the summer, and finally, she clarified some information on Rebuild Illinois funds from IDOT, and it was her understanding that MFT funds can now be used by the city for regular projects in addition to their specially designated projects.

Public Works director Lake then reported that he was making sure that all city employees were getting “seat time” in snow removal equipment.  “The guys are doing well, coming along nicely, “ Lake stated.  He went on to note that the importance of them getting the snow removal experience while they can. “It’s hard to get them the experience if there’s no snow,” Lake noted.  He then went on to note that there continues to be equipment issues at the lift stations, and that Cummins had provided quotes for repairs and maintenance to the diesel motors at the stations.

Mayor Eversole Gunter then made a short report, noting that the city and consultants had put together a rough draft of FAQ’s concerning the potential sale of utilities versus the city continuing to make their own improvements.

Finding no other business, Hooker moved to adjourn at 6:59 p.m. and the motion passed unanimously.