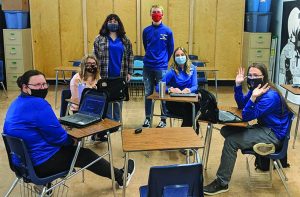 By Tony Hooker
The 2021 VGHS varsity scholastic bowl squad has picked up right where their talented predecessors from the previous season left off, finishing the regular season portion of their competition season with a perfect 10-0 mark.  As you may recall, the 2018-19 and 2019-20 squads competed at nationals, coming away as the number 1 small school team (under 500 students) at a  national tournament in New Orleans in 2019.

As could be expected, the pandemic has caused many issues, both foreseen and unforeseen.  “This year has been tougher on everyone, as teams have had to compete online and our team is breaking in a new head coach,” First year head coach Jim Kestner said. “Our kids miss the camaraderie of scholastic bowl. Even so, we have been strong, even after last year’s top-scorer, Jackson Wiessing, graduated.”

Kestner said that a pair of students had stepped up to replace Wiessing, who has taken his talents to the University of Illinois. The coaches didn’t have to look far to find one competitor ready to up his game, as Jackson’s younger brother, Caleb, a junior,  finished the regular season by scoring 490 points, which equaled the second most points on the team.  His classmate Izzy Davis has been the unquestioned leader of the squad, tallying 550 points on the season. Also helping the squad of late has been Andrew McQueen, another junior whose knowledge of computers and math has been a benefit to the team.  Kate Eisenmenger, the lone senior on the squad, has made valuable contributions in math and science, as well.  Sophomore Allison Kneer is the only other player to have scored points in a varsity match this season, but classmates Sam Bender and Ellen Kellerhals have gained valuable varsity experience.  Another sophomore, Jesse Bessent, is being called up to varsity for the post season after leading the JV squad with 140 points scored. A new comer to the squad is junior Mylee Sprague.

The JV Squad suffered through some growing pains in 2021, as many of the aforementioned sophomores participated in varsity matches, leaving untested freshmen to make up the bulk of the JV contingent.  As a result, the team’s 1-5-1 record wasn’t what they might have hoped to attain, but the always ebullient Kestner waxed philosophical over the season’s results.  “Part of that (the season record) stems from moving up sophomores to varsity, leaving the team with mostly freshmen to compete against opponents who have larger numbers of older students on their teams,” Kestner explained.  “Even so, we have kept up great attitudes and continued to improve week by week.”  In addition to Bessent, others who scored points for the JV squad include Sabrina Wehrheim, with 50 points.  Ethan Carroll, Landon Kappes and Austin Zoch each tallied 30 and Alison Pangburn and Lauren Sprague contributed 20 apiece to the team effort while gaining valuable experience.  Other team members who will be looking to turn 2021 experience into 2022 success include Kyleigh Price, Jeryn Bennett and Zach Wells.

For the varsity, the post season looms, and Kestner seemed pleased with the number 4 seed his squad received for the sectional competition that includes many larger private schools from Decatur, Bloomington and Champaign.  “Regional hosts are being determined now, so we are hoping for a number 1 or number 2 seed at a regional,” Kestner said. “Regionals will be hosted in person on 3/8, though we don’t yet know the sites, and the sectional will be held at Blue Ridge High School on 3/11.”