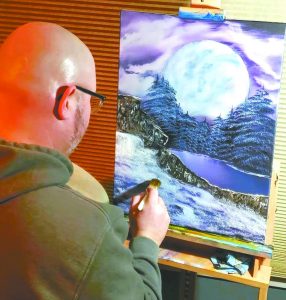 Photo: Nathan Burton
Nathan Burton painting Silver Moon, one of his favorites that he has painted. 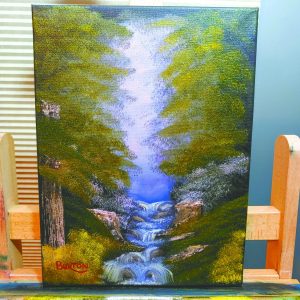 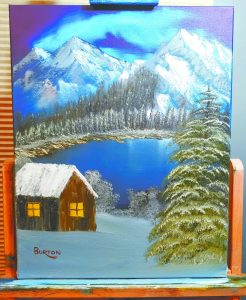 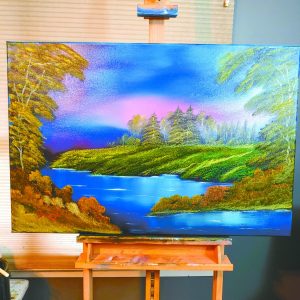 Burton said that his time in office thus far has gone very well. He noted this was partly due to the amazing staff that received him with open arms and have been very open to the changes he has wanted to make, and those that have already been put in place. He said that everyone has been very willing to work together and it has been a great team effort.

Burton noted that clerk jobs in the office do not pay a lot of money. However, the clerks come in day in and day out, never complaining, and go through hundreds of files a day. They really keep the office running and he can’t thank them enough. Mary Ochs (chief deputy) and Stacey Penny (traffic and criminal supervisor) have a combined over 40 years of experience in the office. He said that they have been a godsend as far as making this transition possible.

Burton has brought some changes, or as he prefers, baby step improvements of things already put in place prior to him, to the office. The first thing the office has done is gone away from using traffic paper files for non-mandatory court appearance traffic citations. He explained that when a citation is issued, it was previously brought into the office where they created a paper file. Now, any documentation for that case that is received is scanned into the computer and filed electronically. Over time, this will lead to other files also being online which will reduce costs and increase efficiency. Burton noted that he campaigned on technology and efficiency and this is his first step to that.

Beginning February 15, the office will begin e-filing for felony and juvenile cases. This will be for subsequent filing only. Burton said that this will really maximize efficiency, reduce the amount of files taken at the office, and those that need to be mailed out. He said that it also allows them to view compacted cases that come in right on the computer to compact the workspace and workload.

The office has also changed the way that some notices were sent out to defendants. Notices were previously typed, printed, and mailed. Now, after working with Judge Richard Broch and Associate Judge Gary Weber, they have put it in place for some of the notices (for example a payment order.) to be filled out in court by Burton or another clerk, signed by the judge, and then distributed in open court. This reduces a lot of costs for the office in mailing and postage. Burton said “to some, it may not seem like a huge cost reduction. However over time when we implement more of these cost-saving measures you are going to see a significant reduction in the amount of taxpayer dollars used for these court documents or notices.”

Defendants have the option to pay online fines and fees through Judici.com. At the moment, traffic citations are not set up there. However, the platform is being built and algorithms developed to go active with e-plea and e-supervision. Burton is finalizing logistics with Parkland College, who does traffic school for supervision for Douglas County. Once those are complete they will be able to go live with e-plea and e-supervision. This will allow people to pay a traffic citation online and accept court supervision in the same transaction.

One of Burton’s newly discovered talents is painting. He noted that when COVID-19 took effect he was looking for a new hobby that he could do indoors, and decided that he wanted to try and paint. Burton said “the first thing I wanted to do was study somebody who I knew could paint, which was Bob Ross.” Burton looked to YouTube where he found over 400 episodes of Bob Ross, and made it his mission to watch at least one episode per night to study his theory of painting and the wet-on-wet oil technique. Finally, on December 23, after completing 115 episodes, he decided that he wanted to give it a try using his Bob Ross Master Paint Kit, a Christmas gift from his wife.

Burton began posting the paintings on Facebook where he said they have received a lot of popularity. He said that it has been such a great and relaxing hobby to have picked up. Some of the favorites he has completed include one for his sister of a waterfall deep in the woods and a painting he calls ‘silver moon’ with a large moon being cradled by pine trees deep in the forest. Although, he notes that each is special to him.

Burton said that he begins each painting with a vision in his head of what he wants to paint. However, he doesn’t think that any finished painting matches his original vision. He said as he goes through the painting he notices things that could be changed, and they always end up better than he expected. Burton said “I would encourage any person who has any sort of desire to let their creative abilities out to really look into it. Just pick up a paintbrush. Paint what makes you happy. Just keep moving forward with it.”