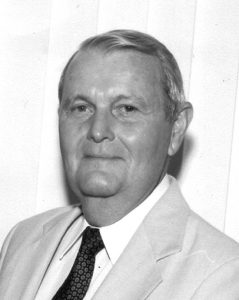 Private Graveside Services will be held at the Tuscola Township Cemetery, Tuscola, IL

Jim was born on September 5, 1930 at Dundas, IL, a son of IC and Daryl (Curtis) Threet. He married Doris Wetzel on April 13, 1952 at Immanuel Lutheran Church in Tuscola.

Jim was preceded in death by his parents, dear son: Tom and older brother: Dick Threet.

He graduated from Champaign High School in 1948 and attended the University of Illinois majoring in Journalism before being called to serve in the United States Marine Corps in 1951 during the Korean War. He was editor of the base newspaper at Barstow, CA before his discharge in 1953.

Jim was employed at USI/Quantum Chemicals plant near Tuscola for 33 years (1953-1986) as a quality control lab supervisor, retiring in 1986.

Jim’s interests included playing golf, fishing in Minnesota, hunting Indian arrowheads along the river west of Tuscola with his wife and sons. He enjoyed watching all sports on television and was an avid St. Louis Cardinals fan.